Chelsea legend Petr Cech is in line to leave Stamford Bridge after a successful ten year stint with the London club. The Czech International will in all certainty join nouveau riche French side Monaco after it appears that Thibaut Courtois will take the number one goalkeeping role for the Blues.

It is believed that Cech asked manager Jose Mourinho to facilitate his exit after Courtois rejoined Chelsea, and the Portuguese boss has agreed to do so, Chelsea are expected to let him go for a symbolic amount of around €2m. Monaco and PSG are both interested. 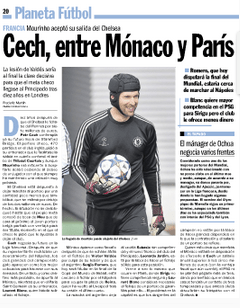 Monaco are the favorites to sign him, given Victor Valdes’s injury and Argentine Sergio Romero’s imminent departure to Napoli and the fact they are more willing to pay big wages for Cech than PSG.

Soccerlens view: Cech’s departure from Chelsea looks imminent but we believe that the reports from France aren’t entirely correct. Italian side Napoli had earlier signed  Mariano Andujar, the Argentine goalkeeper who will spend the season on loan at Catania.

Moreover, Rafa Benitez’s side are also close to complete the loan deal of Liverpool’s with both the clubs agreeing to pay half of Reina’s wages.

Sergio Romero’s heroics at the World Cup despite featuring in just a handful of games for Monaco would mean that the French side can ill afford to lose a player at the top of his game.