Chelsea are keen to redevelop Stamford Bridge and have opened talks over a temporary switch to the home of English rugby Twickenham.

The Blues have a seating capacity of a little under 41,800, but in order to maximise their income, mainly to comply with the Financial Fair Play rules, they have announced the plans to increase that closer to 60,000 earlier this year. 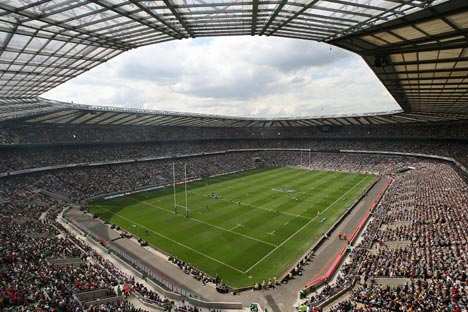 As a result, they will need a new temporary home, may be for one year and have identified Twickenham as a possible destination.

A spokesman for the Rugby Football Union confirmed that a discussion have taken place as quoted by the Guardian:

“We are regularly contacted by a variety of organisations, within and outside sport, on a wide range of opportunities concerning the use of what we believe is a world-class stadium.

“We have had an inquiry from Chelsea FC but have not had any discussions of any substance.

“While we don’t comment on any specific confidential conversations, each request is taken on its merit, assessing a variety of factors, such as the effect on the pitch, availability, transport and local considerations and other important implications.”

Chelsea considered the options of building a new stadium; the Londoners, however, had been unsuccessful in their attempts to relocate to Battersea Power Station and Earls Court.

Despite being told by Hammersmith and Fulham council that Chelsea have a “little chance of acceptability” about the expansion plans of Stamford Bridge, it seems that the Blues are likely to expand their SW6 ground within next couple of years.

Twickenham has a capacity of 82,000 and has never hosted a football match. They will host a number of games at the 2015 Rugby World Cup; therefore, any potential move could only happen around 2016/17 at the earliest.