According to reports in Portuguese website ZeroZero, Manchester United representatives are already in Lisbon to finalize a deal for the highly William Carvalho. The story has also featured in the cover page of national daily O Jogo. 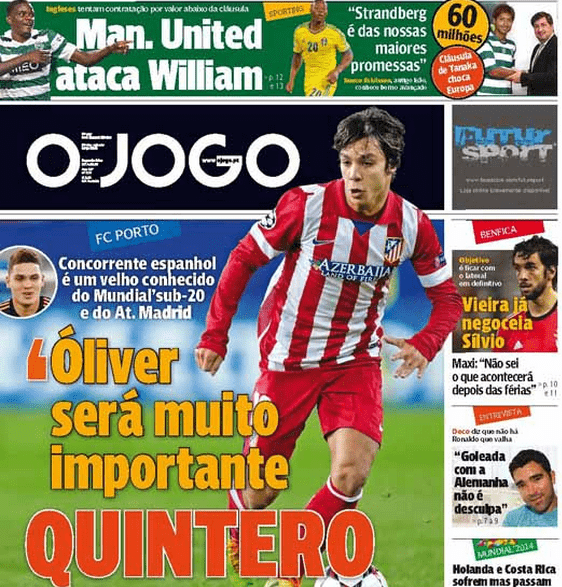 We had reported last week that the Sporting Lisbon player is open to a move to Old Trafford but the Red Devils despite acknowledging the talent of the 22 year old are reluctant to pay a hefty €45m for acquiring the services of the player.

Chelsea are also interested in the player who has dazzled with his performances for Sporting last season but it is believed that United quickly want to wrap up the deal before getting entangled with the Stamford Bridge outfit in a direct bidding war.

Carvalho who is a priority for Van Gaal would seamlessly fit into United’s system thanks to his dazzling ability on the ability and the ability to hold fort in midfield.

Moreover being strong he would be an imposing presence in the middle of the park who doesn’t commit himself into tackles and is also able to play as a centre back if needed.

Carvalho’s physical strength also allows him to break down opposition attacks and the player would be a long term asset for the Red Devils if their acquire the services of the Portuguese after already having signed Luke Shaw and Ander Hererra in the past week.