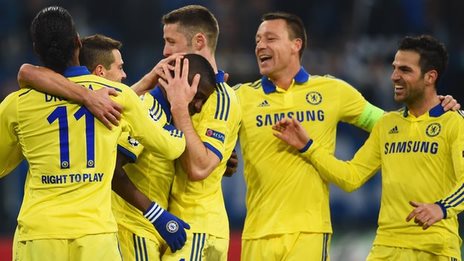 I know we Chelsea fans have been treated to some incredible football by our side this season, but last night’s 5-0 over Schalke was as good as it gets. This wasn’t a bottom-half Premier League side that we put to the sword; this was a side full of Champions League regulars. And what’s more, we did it to them on their own turf. Schalke hadn’t lost at home since April, and our former manager Roberto Di Matteo, now in charge of the German side, wanted to make sure that run continued.

But, Chelsea were on top right from the get go and Diego Costa made Schalke goalkeeper Ralf Farhmann make a save in the first minute. From the resulting corner, John Terry headed in his second goal of this season’s Champions League campaign. What followed was absolute dominance. Some slick passing and movement meant that the home side couldn’t get the ball for long periods.

The second goal was a thing of beauty. Some intricate passing around the box involving Diego Costa and Oscar was finished off by Willian’s low strike. Farhmann may look at it again and kick himself for letting the ball go through, but no one could argued that Chelsea more than deserved the two-goal lead.

The third goal, which came just before half-time, was the final nail in Schalke’s coffin. After Farhmann had made amends for his mistake with a fine save to keep out Oscar, defender Jan Kirchhoff inexplicably headed into his net from Fabregas’ corner. The jeers at the break reflected just how the fans felt at seeing their side completely played off the park.

What was most impressive about this performance was that we hardly gave them a single opening in the game. Yes, there was one deflected effort in the first-half which struck Thibaut Courtois’ crossbar, but apart from that, our midfield and backline were absolutely rock solid. The likes of Klaas-Jan Huntelaar and Kevin-Prince Boateng could hardly get into the game, as Chelsea dominated every area of the pitch for the full 90 minutes. 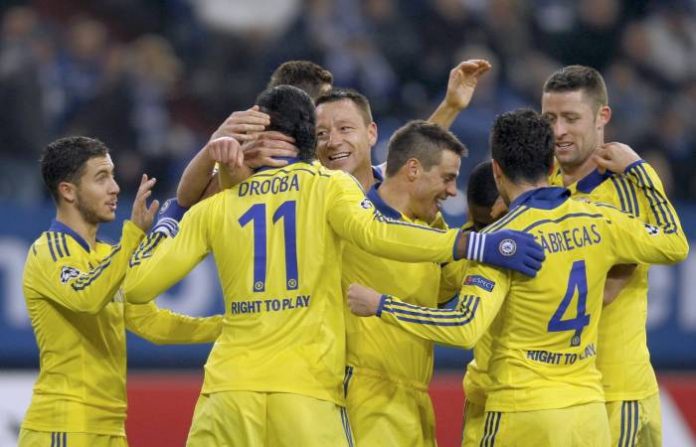 It was good to see Didier Drogba coming on in a Chelsea shirt on German soil, once again. The last time that happened, Di Matteo cried with happiness. This time, he may well have shed tears of disbelief and anger. Drogba got on the scoresheet late on, tapping into an empty net, before setting up fellow substitute Ramires for a fifth a minute later. The thrashing was complete.

The scoreline was emphatic, but what will catch the eye most is how Chelsea were in control of every single aspect of the match throughout. This win means that we qualify as winners of Group G to the last 16, and on current form, there aren’t too many clubs in the world who can beat us.

The last time the Champions League trophy came to Stamford Bridge, under Di Matteo in 2012, there were several people who attributed it to good fortune. This season, we have both the team and the spirit to do it the right way. Often accused of being boring, Jose Mourinho has molded this group into a side playing some scintillating attacking football.

In 2012, the final was played in Munich. Last night, in Gelsenkirchen, we ripped Schalke to threads. It looks like Germany is indeed a happy hunting ground for Chelsea. Let me take a look at where the final will be held this year.

Goodness me, it’s in Berlin!