It seems like PSG have taken the policy of Barcelona to lure opposition players. The Catalan giants have a tendency to speak about players, whom their club is reportedly interested in. Remember, how almost each and every day Barcelona players used to speak about Cesc Fabregas or Alex Song, when the players were at Arsenal. 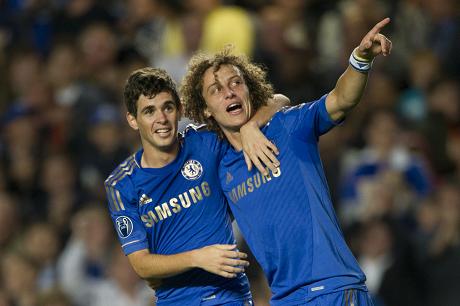 PSG are almost doing the same thing with Chelsea. Prior to Chelsea’s Champions League knock out tie with PSG, Brazilian midfielder Lucas Moura, who is not selected for the WC team, claimed that he would love Oscar to join him at the Parc des Princes.

“Oscar is a very good player. A rare talent in today’s football, given his qualities. He is very complete and is very smart. We need someone like him at PSG.” he said, as quoted by The Daily Telegraph.

Another midfielder, Yohan Cabaye, also claimed he would love to see Chelsea winger Eden Hazard joining them at the French club. Chelsea boss Jose Mourinho in his trademark style, delivered sharp riposte, saying the French club would need to pay £300m to sign both the players.

And now, Brazil and PSG skipper Thiago Silva now claims in an interview with Le Parisien, PSG will be a stronger team next season with Chelsea duo David Luiz and Oscar. He said:

“In order to win, a team needs a strong group. I think we have it, but we still need 1 or 2 players to compliment it and make the team even stronger than it is today. If David Luiz and Oscar join us, we’ll become much stronger for sure.”

Luiz and Oscar are expected to play a crucial role in the World Cup for Brazil. While Chelsea probably won’t listen to any offers for Oscar, but the Blues could be willing to do business for Luiz.