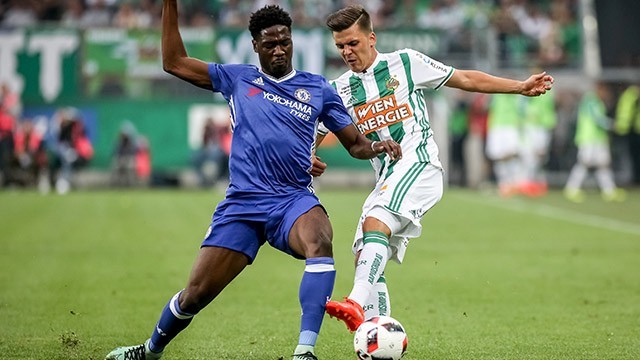 Chelsea defender Ola Aina has committed his future to the London club by signing a four-year contract, the club has confirmed.

Aina is one of Chelsea’s academy’s most promising young talents and has been knocking at the corridor for a potential role in the senior team for a while now. Last season, he was promoted to the Chelsea senior team but the teenager didn’t get a single minute of competitive action.

Aina had let his contract run down and became a free agent on July 1st. However, he has decided to stay at the club and impress his new manager. The player has confirmed that he has signed a long-term deal with the Blues. The youngster joined the club as a U11 player in 2007 and he is now set to stay until at least 2020.

‘I am delighted to sign a new four-year deal and commit myself to the club for that period of time. I am very happy and I want to keep progressing this season,” he said.

Aina says he is delighted to have signed a new deal and wants to impress his new manager Antonio Conte. The 19-year-old was involved in Chelsea’s first pre-season game against Rapid Vienna last Saturday. While he did not start the game but he was one of the substitutes off the bench replacing left-back Baba Rahman at half-time.