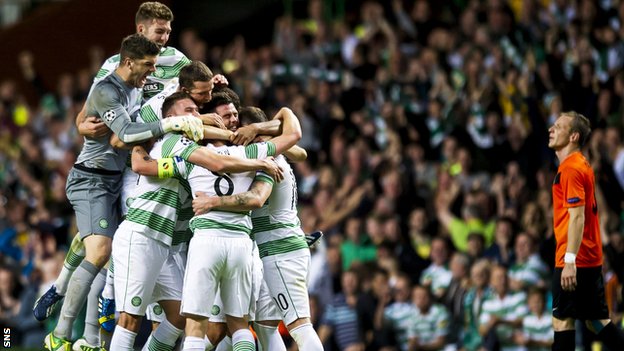 There’s something particularly dramatic about football under floodlights. The darkness all around creates the image of nothing existing outside of the action on the pitch. Like the footlights at a theatre it sets a scene that always seems destined for drama. Add in the spice of Champions’ League qualification and the need to overturn a two goal deficit, stir with intoxicating desire and you have all the necessary ingredients for a classic night of European football.

Wednesday evening night saw just such a game, as Celtic sought to redress a first leg 2-0 defeat against Kazakh club Shaktar Karagandy in Glasgow. Whilst all of the pre-match punditry was about being calm and not playing at a frantic pace, once the first whistle went, the fervour of the crowd was never going to allow the team to play a measured game. They demanded frantic attacking, and got it as Celtic poured forward in waves of zealous endeavour. As is often the case in these matters, as the break approached, with the belief of both players and fans probably just beginning to wane, Celtic secured the breakthrough with Commons netting a left foot shot from some twenty yards. The goal brought an explosion of relief across the stadium, followed by a deafening roar that was only truly stilled when the referee blew for half-time.

With the Hoops now riding a wave of renewed belief, they scored the second, and game tying goal, within a few minutes of the restart, but that merely heralded the point at which the real drama began. As in the words of the Bob Dylan song, “When you ain’t got nothing, you’ve got nothing to lose.” At the start of the game, it was a case of chase to get into the tie. Now they had succeeded in doing that, it was as if the sudden reality, not of how much there was to gain, but how much they now may lose, came to play on their minds. Personas dramaticas, all. The nervous tension crackled in the air as the virtually unknown Kazakhs took to their part of pantomime villains seeking to ruin Celtic’s day with zeal, sensing a moment to strike. A goal now for Shaktar would surely have been the coup de grace for Celtic ambition; a knife to the heart that would also puncture the now inflated dreams. Long throws and corners into Celtic’s box seemed to cause panic and a shot crashed against the bar, when it surely would have been easier to score.

Time ticked away, and still Celtic pressed, but with increasingly frantic need, and decreasing effectiveness. Shaktar with packed defence, refused to let the Scottish champions through, and always had half an eye for the break that would tear Celtic hearts asunder. Extra-time seemed inevitable as the clock ticked past ninety minutes, but true theatre has no truck with such things. It demands a final act, a resolution, a resolution of the dispute.

So it was.  A final, so late, sally arrived as Stokes jinked into the box before pulling the ball back for Forrester to smash high into the net. Cue explosion of noise. Cue ecstasy. Cue manager Neil Lennon entering the arena from stage left to join the throng of celebrating players. All done. All dusted. Well, not quite. Almost from the kick-off Shaktar won a free kick near the halfway line. With nothing to lose and everything to gain, they duly loaded the box for the ball to be dropped in. Celtic fans were dreading the denouement of seeing their team grab defeat from the jaws of victory. The ball was swung in, but probably too deeply. Out came Celtic ‘keeper Fraser Forster to snaffle the ball and fall to the ground clutching dearly, as if it was the very stuff of life itself. Taking measured time he stood and delivered the ball weightily up the park, the referee blew for full time and the day was replete. Cue delirium, mixed with relief all round – except the minor pockets of Shaktar fans, but for them this was probably a rare occasion in the club’s history anyway.

The crowd weren’t exactly shouting “Author, author.” Lennon however took his bow and the bouquets in hugs from his staff and players. The crowd exited the stadium eventually with talk of encores involving the luminaries of high-table European football. Shakespeare has the character Jaques, in ‘As You Like It’ declare that “All the world’s a stage, and all the men and women merely players.” This was very much as Celtic ‘like it’, but in paraphrase it there were no ‘mere players.’ All were heroes. On to the next performance, as Celtic take their show on the road.