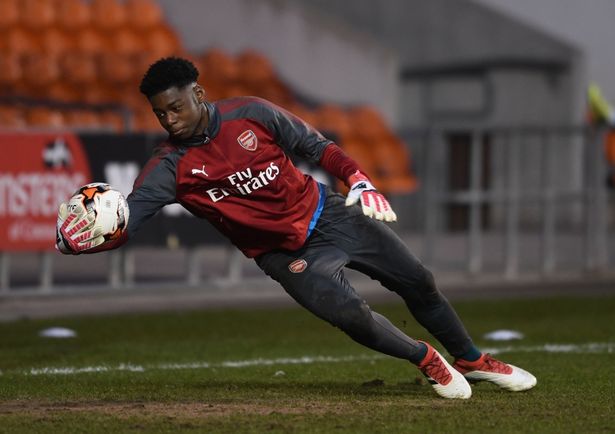 Arsenal keeper Arthur Okonkwo could leave the club this summer and the likes of Leipzig and Celtic are interested in securing his services.

The highly-rated young shot-stopper is yet to sign a deal at Arsenal and the Gunners could lose him on a free at the end of this season if the reports are to be believed.

Currently, there is a contract stand-off between the player and the club. However, the England under-17s keeper is keen on staying at Emirates.

Apparently, Arsenal have offered him a professional contract but the deal is not satisfactory for the player.

The Gunners have had a similar issue with first-team star Jack Wilshere as well. It seems Arsenal are not willing to loosen their purse-strings to keep their players.

Okonkwo is very highly rated and he is expected to be a part of the first team squad in future. Letting him leave for free could be a massive mistake from the Gunners.

The 6ft 5in keeper is one of the best young players at the club and is quite highly regarded in the England set-up. He has also trained with the first team already.

Other clubs are now looking to take advantage of the situation and offer him a better deal. It will be interesting to see what happens in the summer.