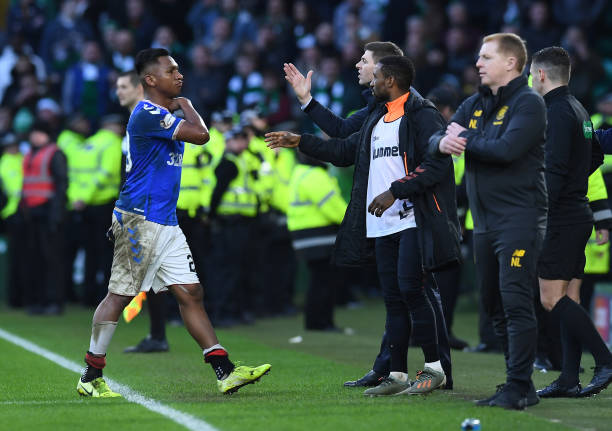 Rangers beat Celtic at Parkhead on Sunday, securing their first win in nine years at the ground of their bitter Old Firm rivals and cutting the gap at the top of the Scottish Premiership to two points, with a game in hand.

Steven Gerrard’s men were the better team, running out 2-1 winners despite finishing the game with 10 players.

Rangers striker Alfredo Morelos was shown his marching orders in the closing stages of the clash after picking up two yellow cards, and he aimed a throat-slitting gesture at Celtic fans when he was leaving the pitch.

Hoops hero Chris Sutton wasn’t happy with the Colombian’s behaviour, and he has urged the SFA to hand him a five-match ban for violent gesture.

Gerrard hasn’t responded to the controversy, and that has further irked Sutton.

“When I said Morelos should be handed a five-game ban for his throat-slitting sign at Celtic Park on Sunday, it wasn’t about the Rangers striker, the result or anything else. It was purely about the message this sends out about Scottish football. It’s a much wider issue,” Sutton told Daily Record.

“The party line coming from Ibrox was the gesture meant something else. It was down to a cultural difference. The gesture means ‘it’s over, it’s finished’ is the defence. Maybe so but most people I know will tell you it means ‘I’ll cut your throat’ in this country. That’s the reality.

“What I can’t fathom is if the player had meant something else why did he, or his representatives, not release a statement apologising for the misinterpretation and say it won’t happen again? That would maybe have helped and have diffused the situation. As for the different culture argument, yes he’s playing his football in another country but it’s not like he has only been here five minutes.

Morelos was sent off against Motherwell after aiming the same gesture to their fans upon scoring, and he has to understand that this isn’t Colombia.

While he definitely doesn’t like Celtic fans, he isn’t allowed to pass such a message across, and he could be in more disciplinary hot-water if the SFA decides to act.

Gerrard may yet to respond openly, but he would have most likely reprimanded Morelos in private.

However, that isn’t enough, and it will be interesting to hear what he has to say when reporters ask him about the incident in his next press conference.