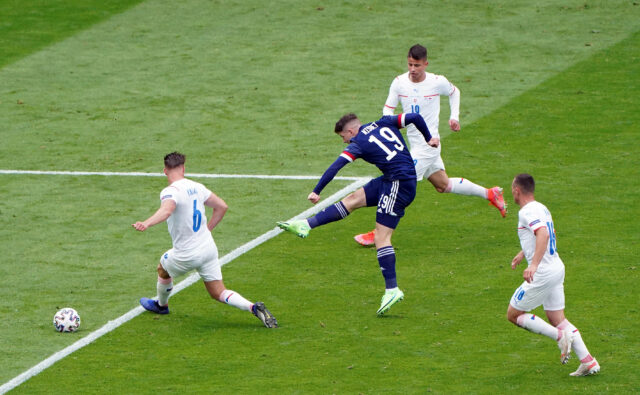 Celtic fans have taken to social networking site Twitter to express their reaction to reports linking the club with a move for Kevin Nisbet this summer.

After a disappointing 2020-21 campaign, Celtic are looking at a massive rebuilding project under new manager Ange Postecoglou.

The Bhoys have already signed Sheffield Wednesday defender Osaze Urhoghide on a four-year deal, but more players are expected to arrive before Celtic’s Champions League qualifier against Midtjylland.

Signing a striker is key for Celtic, with the future of Odsonne Edouard in doubt. The Frenchman has been linked with a move away from Parkhead, but Celtic have not received a bid they will consider.

Celtic confirmed yesterday that Leigh Griffiths, whose contract expired last month, will stay at the club after agreeing to a one-year contract extension.

It seems the Bhoys are showing keen interest in signing Nisbet, who came on as a late substitute in all three of Scotland’s Euro 2020 games against the Czech Republic, England and Croatia.

Hibernian are demanding around £4 million for the striker who scored 18 goals in all competitions last season.

Many Celtic fans feel that the club shouldn’t hesitate in signing him, considering the amount is well within their budget.

Others feel the club should move for players who can help Celtic compete in Europe and not just in Scotland.

Don't think we could argue with 4M

If he scores the goals that win us back the title 4m is peanuts! He has proven he can score goals in this league and with the chances Celtic create he should easily get 25+

Not seen enough of him to have an opinion if he’s good enough but we can’t argue with the price when you look at the prices we are looking at for our pkayers.

We always moan we get short changed for our players but then expect to take other teams players for budget prices… Just pay the money… Looked what happened with the mcginn deal.

Definitely worth the risk he has excelled at level of his career so far and the next step is us could easily get 6 years out him maybe more . It’s probably because he is Scottish and plays in the SPL that people are turning there nose up

Celtic passed on the opportunity to sign John McGinn from Hibs a few years back.

McGinn went on to join Aston Villa, and he is now one of the top midfielders in the Premier League. There is a gamble worth taking here.