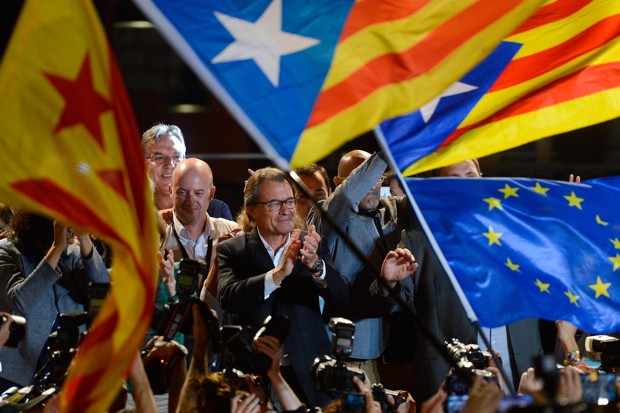 With the news that the two parties holding a majority of seats in Catalonia’s new regional parliament have set the ball rolling for the formal start of secession from Spain, fears of a fragmented La Liga competition in the future have continued to spread in earnest.

The “Together for Yes” pro-independence alliance, who won 62 of a possible 135 seats in the September elections, together with the CUP party, the radical leftists who have 10 seats, presented the motion for the chamber on Tuesday. The Catalonian people turned out in record numbers last month, voting in a landslide victory for pro-independence parties promising to push for the formation of a new republican state of Catalonia.

Soccer in Spain has been unwillingly put on the spot concerning this ongoing sensitive issue for years, with La Liga bosses continuing their text book-led stance on the rumours that Barcelona, for one, would be ejected from the Spanish top flight if Catalonia achieved independence from Spain.

“If Catalonia became independent,” La Liga chief executive Javier Tebas said, “Taking into consideration the Sports Law that would be enforced by the rest of Spain, Barcelona wouldn’t be allowed to play.”

For the thousands of Spanish Barcelona fans across the country, the club has become more and more of a political mouthpiece. Pro-independence flags are often seen in the midst of the Barca faithful during games, an occurrence that FIFA has taken particular exception to, fining the club on two occasions for “the use of gestures, words, objects or any other means to transmit any message that is not fit for a sports event, particularly messages that are of a political, ideological, religious, offensive or provocative nature.”

The club itself holds an apolitical standpoint, but continues to be swept this way and that in the storm.

Clearly, for one of the top three domestic sides in the world, with Leo Messi – arguably the greatest player ever to have played the game – in their ranks, to become effectively league-less, would not only affect Spanish soccer on almost every level, but it would also have a shock wave effect on the rest of the soccer world.

The modern Spanish soccer landscape has been built upon the success of both Real Madrid and Barcelona. Some may say the duopoly present at the top of La Liga makes it a lesser league than say the English Premier League, but the worldwide pull of El Clásico has never been stronger. The world stops, as former Real manager Jose Mourinho once said, when the two juggernauts of Spanish soccer collide.

Could El Classico exist as an exhibition match organised by neighbouring ‘countries’? Would Madrid become like Bayern Munich in the Bundesliga and coast to utter domination for the foreseeable future in the absence of Barca?

And what of the Catalan side themselves? If the unthinkable becomes reality, what would become of the world’s fourth richest club?

French Prime Minister Manuel Valls yesterday welcomed the idea of initiating Barcelona into Ligue 1, citing Monaco’s participation in the French top flight, despite being a principality, as reason enough for the Catalans to ply their trade across France.

“Monaco play in Ligue One, so why not Barcelona?” Valls told French political magazine ‘Challenges’ (via the Telegraph).

This is something that would surely horrify the majority of soccer fans. The importance of consistency and strong foundations of leagues and the history behind them cannot be understated. Barcelona won the inaugural Spanish league back in 1929, and they have been an enormous part of its history from then on.

Anything other than a continuation in La Liga for Barcelona would be an abhorrence. Politically, however, things are no where near as straightforward.