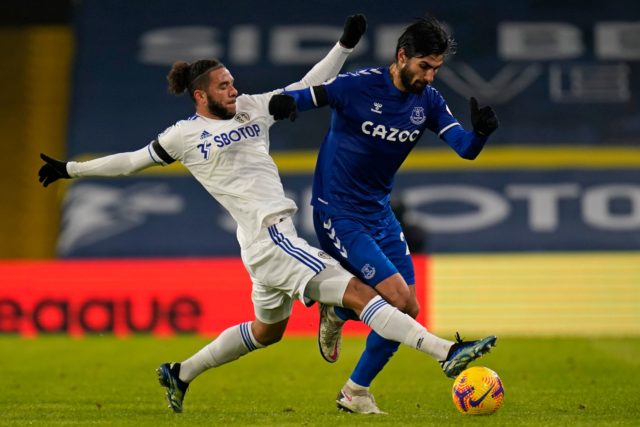 Carlo Ancelotti has hailed Andre Gomes as the ‘best player on the pitch’ after Everton won 2-1 against Leeds United Elland Road on Wednesday.

The 27-year-old midfielder, who is on £112k-per-week wages at the Merseyside club, has managed only seven Premier League starts this season.

Since joining permanently from Barcelona in 2019, Gomes has been in and out of the side, with injuries playing a big part. The Portugal international is a top-quality midfielder, and Ancelotti was very pleased with his effort against Leeds.

While the likes of Ben Godfrey, Abdoulaye Doucoure and Dominic Calvert-Lewin was impressive for the Toffees, Ancelotti feels that Gomes was the best player on the pitch.

“In my opinion, the best player on the pitch was André Gomes…technically, physically, tactically,” said Ancelotti after the game.

“I think so. This is the real Andre Gome s. The Andre Gomes that we need.”

“In my opinion the best player on the pitch was André Gomes…technically, physically, tactically.”

On Gomes being back to his best,
“This is the real André Gomes, the one we need”

Gomes started in midfield alongside Doucoure and impressed heavily during the game.

With Allan set to return shortly, Ancelotti will have plenty of options in midfield.

Everton fans will love the fact that Gomes has finally returned to form, and he is rightly getting praise from the Italian boss.

The Toffees have been superb away from Goodison Park this season, and they have now registered four consecutive away wins.

With Everton set to face a tough run of fixtures, Gomes finding his best form will come as a huge blessing for Ancelotti’s side.