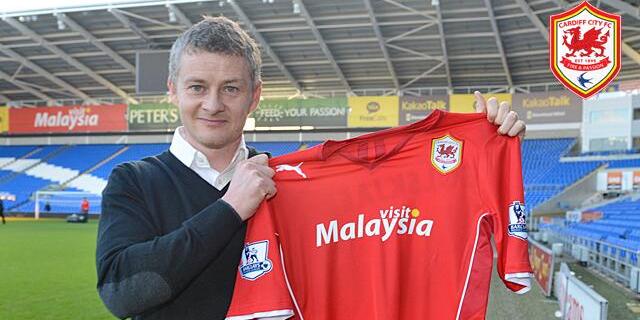 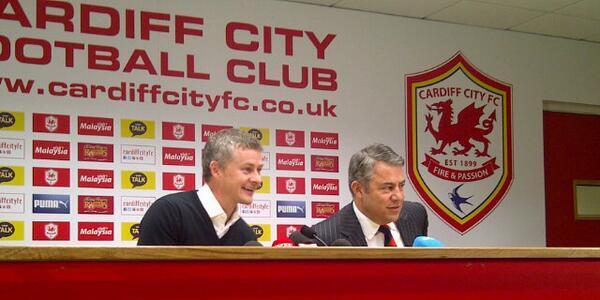 The former Manchester United player arrives at the Premier League club after a successful stint as manager of Norwegian side, Molde.

“It is a fantastic challenge. Cardiff are ready to take the next step up. I hope I can help them,” Solskjaer said at his unveiling,

“I’ve always dreamt of being a manager in the Premier League and I’m delighted to get the opportunity.”

The 40-year-old was seen at Cardiff’s last match, a 2-0 defeat away to Arsenal, and now becomes the successor to Malky Mackay at the Welsh club.

“I want to play a good style of football and yesterday [against the Gunners] we showed what a threat we can be.

“We’ve got some of the toughest trips in world football coming up this month. They’re games we’ll relish and look forward to.”

It has been a turbulent debut season for the Bluebirds, with owner Vincent Tan earning the wrath of Cardiff fans for his treatment and sacking of Solskjaer’s predecessor, Mackay.

But the Norwegian believes that the Malaysian billionaire has the club’s best interests at heart, and is looking forward to working closely with him,

“Everything isn’t exactly what it seems from the outside.”

Solskjaer will travel to Old Trafford on 28th January with his new side, and will surely receive a warm welcome from the Utd faithful having scored the winning goal in their famous 1999 Champions League win.

What do you think? Is Solskjaer the right appointment for Cardiff? Let me know in the comments below…