Despite the failing performances of Scottish clubs in Europe, this season has been relatively entertaining year in Scottish domestic football. We have witnessed some excellent individual games, for example, Aberdeen’s four-all draw with Celtic, Motherwell and Hibernian sharing a six-each draw, Falkirk and Celtic in a three-each draw and a desperately late injury-time winner for Maurice Edu in a crucially important Old Firm derby.

But something that shone out this season has been the glowing performances of Hamilton Academical and St Johnstone.

Marco and Flaxio Paixao, which ever one is which, I’m not sure

The Accies were promoted to the Scottish Premier League in 2008 and under manager Billy Reid, they finished 9th in the SPL with a mixture of promising youngsters and experienced players. Hamilton have produced a number of excellent youngsters over the past few seasons, James McCarthy, James McArthur and Brian Easton have all played a huge part in their instant SPL success.

This season, Hamilton finished in 7th place on 49 points, which was more points than Hearts who finished 6th on 48 points. A reason why the SPL split is unfair and pointless, but thats for another debate. Hamilton have been out of Scotland’s top flight for nearly 20 years before promotion under Reid but could be on the verge of breaking into the SPL top six.

Generally, the same clubs usually fill those positions with a possible exception every so often and these are usually Hearts, Dundee United, Hibernian, Aberdeen and Motherwell. It is looking increasingly likely that captain James McArthur will move south in the summer which might provide a huge hole in the Hamilton midfield.

However, Reid has proved time and time again with surprising signings and have developed into very fine players. An example of this are the Portuguese twins Marco and Flavio Paixao who found very good form towards the end of the season and Reid will be hoping they can continue this when they might be needed more against stern challenges from the top six clubs. 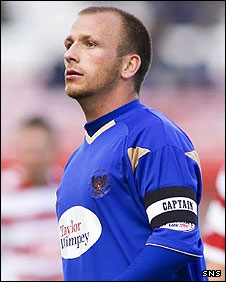 Jody Morris is an important figure in the Saint’s midfield

Derek McIness, a former Rangers and West Brom midfielder, led St Johnstone into the Scottish Premier League this season after an excellent season with the Perth side in the Irn Bru First Division. Like Hamilton, St Johnstone have recieved many plaudits for their very positive brand of football which actually saw them beat champions Rangers 4-1 at McDiarmid Park.

McIness has managed to attract a few players from down-south and the Old Firm with Jody Morris, Michael Duberry and Cillian Sheridan arriving at the newly-promoted club. The Saints finished on 47 points this season and six points ahead of Aberdeen which provided a composed end to the season without the relegation struggles. St Johnstone also reached the semi-finals of the Co-operative Insurance Cup but lost out to eventual winners Rangers at Hampden.

They have had some impressive performers throughout the season, especially midfielder Jody Morris who has shown consistantly that he still has bags of ability for a club of St Johnstone’s stature. Morris, who will turn 32 half-way through next season, provides good cover infront of the back four and impressed with his short passing game and defensive play that has allowed Liam Craig and Murray Davidson to get in on the act from midfield.

It is fresh to see clubs like Hamilton and St Johnstone under two promising and positive managers breaking closer to the top six after the usual finishers have regularly failed to split the Old Firm stranglehold on Scottish Football. Hibernian were looking good odds for that but capitulated in the second half of the season, replaced by Dundee United who excelled under Peter Houston in that time which resulted in a third-place finish and a Scottish Cup triumph.

Whether Hamilton or St Johnstone could do well in Europe is another debate aswell, but it strengthens the point that Scottish Football can see clubs, outside of the regulars, actually playing good football and moving their way up the league.