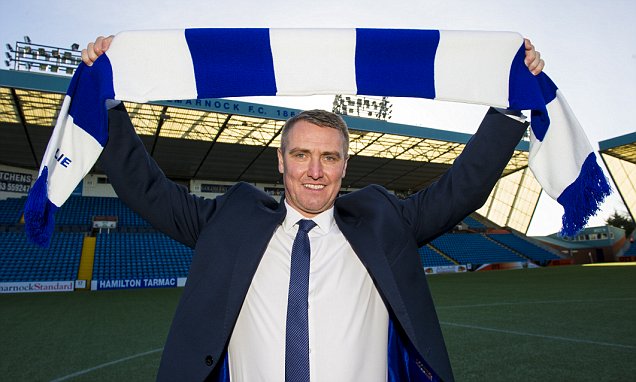 Kilmarnock announced last Monday that Lee Clark was to be the man to succeed Gary Locke as their manager on a three-year contract. The former Newcastle midfielder watched from the stands as Kimarnock were knocked out of the Scottish Cup with 1-2 defeat at home to Rangers last week. Clark’s main objective at Rugby Park is a straight forward one – to keep the club in the top flight. That will be no easy task, though, Kilmarnock are stranded in the relegation play-off spot, trailing Hamilton in 10th by one point.

Clark’s short managerial record from his stints at Huddersfield, Birmingham and Blackpool shows that the Geordie is no stranger to football’s adversities. Clark has had a fair share of dramatic episodes in his time in the dugout, he kept his Birmingham side in the Championship in the last minute of the last day of the 2013-14 season. His spell at Blackpool was marred by a battle between the club’s fans and board, as he resided over their relegation to League One in 2014-15. His tenure at Huddersfield Town was by far his most impressive in management, guiding them to the League One Play-Offs two seasons in a row but failing to secure promotion. Clark was sacked by Huddersfield in February 2012 but the team that he built over three seasons would go on to secure promotion to the Championship just a few months later.

Having began his regime at Kilmarnock with a 0-0 draw at home to Dundee on Saturday, Clark will be looking to put a run of results together in the coming weeks to try and steer Killie clear of the relegation places. They face a tough run of games though, with a home fixture against Ross County sandwiched in between trips to Tynecastle and Pittodrie over the next few weeks.

The scrap to avoid the relegation play-off place will be the defining story of the Scottish Premiership season in the closing months, with the title race that never was faltering and the gap between Aberdeen and Hearts – and then between Hearts and 4th-placed Ross County – too substantial to spark any sort of photo finish. Kilmarnock are one of four, possibly five teams (if we count Inverness in 7th, who are only 4 points above Killie) who could finish the season in the dreaded 11th place.

As is the case for most teams languishing at the bottom of any league, improvements are needed all over the park, but if Kilmarnock are to survive the drop, Clark must find a way to get goals. They currently have the second-worst goal difference in the league (-19) and top scorer Josh Magennis only has 8 goals this term. The squad is thin on experience, and those who have experience – Kris Boyd, for example – haven’t had too many relegation battles in their career. Kilmarnock do have some talented young players however, and in order to keep their team up, the likes of Slater, Carrick and Kiltie will have to excel in the last three months of the season. Lee Clark spoke at his first press conference about his vision for Kilmarnock, with ambitions to get into the top 6 and Europe in the next few years – but all that will fade into the impossible if they don’t maintain their Scottish Premiership status in May.