With England having crashed out of the World Cup at the first hurdle for the first time since 1950 ( their first appearance on world football’s grandest stage), what lessons can be learned from the Three Lions’ last disastrous trip to Brazil?

Of course Roy Hodgson & his FA bosses don’t have access to a TARDIS ( if they did they might have done well to park the trusty police box outside Alf Ramsey’s office for a natter some time around 1966 before hotfooting it to Brazil), but looking to the past just might safeguard England’s future. 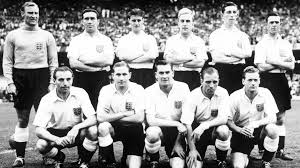 Somewhat ominously, the dead- rubber draw with Costa Rica at this year’s tournament occurred at Belo Horizonte, site of a similarly damning result for Walter Winterbottom’s side.

The 1-0 loss to the United States in their second Group 2 game courtesy of a Joe Gaetjens goal following an opening 2-0 win over Chile ( strikes from Stan  Mortensen & Wilf Mannion)- finished off with a 1-0 defeat to Spain- proved fatal.

Sounds familiar, does it not? Defeat by Uruguay & Italy & the aforementioned draw with Costa Rica, which proved equally insurmountable. Hardly anything to write home about! Though in all likelihood the FA plane had hit the tarmac before reports of their demise were sadly not exaggerated.

But are they facing the end of days in terms of their status as a true power of world football? No wonder the man some dub ‘ Woy’ might be cursing his side’s failure to banish the ghosts of 1950.

Just as the likes of Stanley Matthews had before them, the modern- day squad led by Steven Gerrard flew off to Rio on the crest of a wave of media & public hype.

Indeed, it wouldn’t be a World Cup year if you couldn’t pick up a magazine or newspaper without some patriotic bigging- up of ‘ our boys’ followed by derision after the obligatory quarter- final exit on penalties! 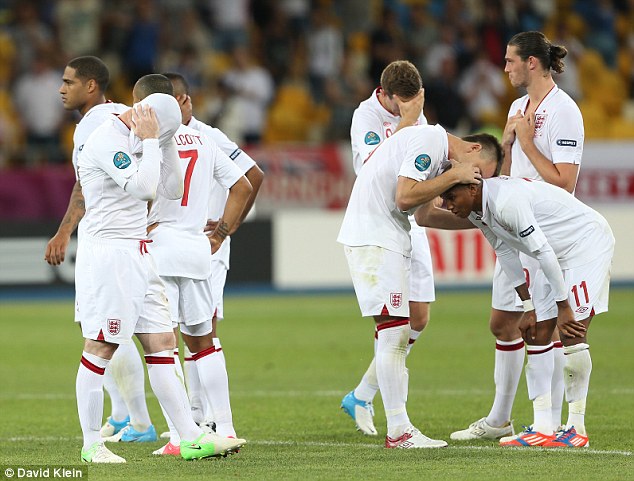 Some might consider their failure to get even that far this year a small mercy, given the number of knockout stage matches dragging on into extra- time & the dreaded spot-kicks following England’s exit. Back in the Winterbottom years, though, the world was still in deference to us ( ironically it was the Brazilian press dubbing us ‘ the kings of football’ as Billy Wright, Tom Finney & the other chosen ones touched down in Rio). 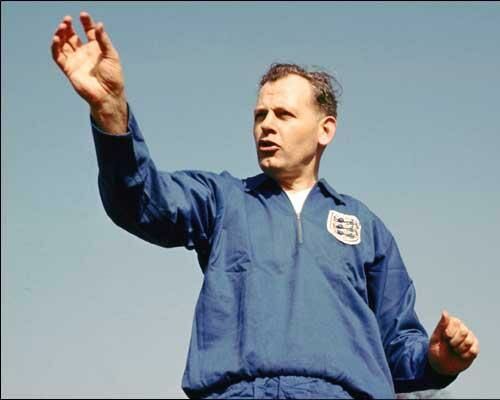 So what went wrong for the Lions of the Fifties? Many accounts have it that the players simply weren’t used to playing in such conditions ( a gripe which had more of a ring of truth then than it might nowadays) & couldn’t get on with the local cuisine ( again, given the greater emphasis on diet in the modern game, similar complaints rightly wouldn’t wash), which in turn affected their preparations for matches.

But surely similar complaints can’t be held up as excuses for failure in 2014, you may well say! 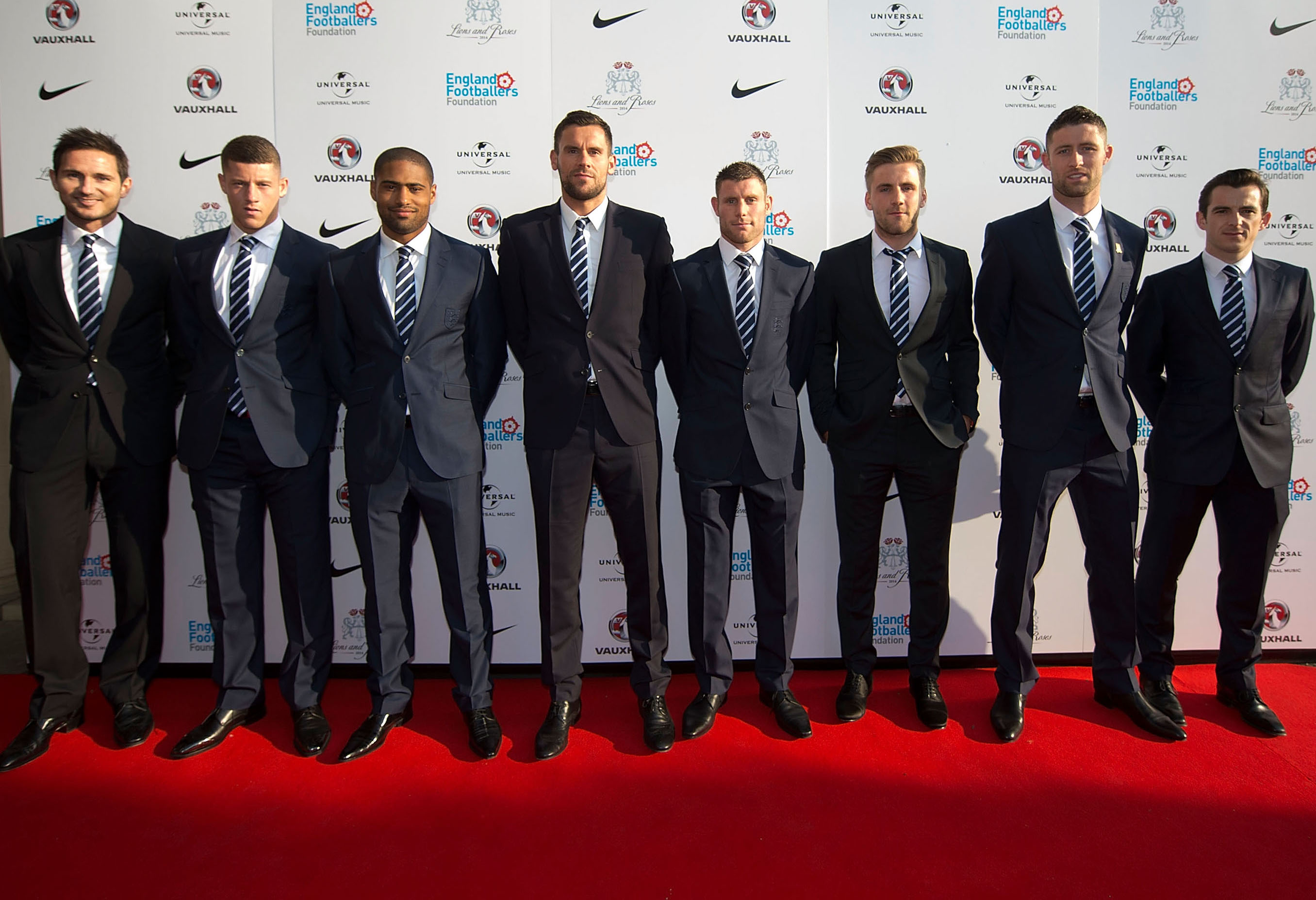 We might also consider the fact that Hodgson selected a remarkably young squad ( with a few ‘ wise’ old heads) to take with him. Brave, or stupid in retrospect?

A dilemma wrestled with by  his predecessor! A look at the 1950 vintage reveals more than a few precocious youngsters in amongst experienced professionals. And of course the present gaffer actually had the power to pick his own team…

A luxury Walter never got. His squads were picked for him by FA selection committee, leading some to unfairly suggest that he might have been a mere puppet emperor of sorts.

But lest ye forget it was he who was tasked with the nitty-gritty of training & on-pitch matters! 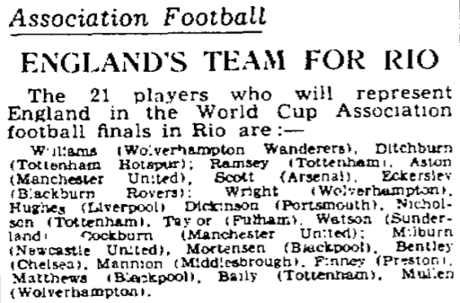 Thankfully he was eventually listened to. Not surprising, given his level of insight. Some of the points he raised over the course of his time in charge will make interesting reading for the man who now sits behind his desk ( that is if he had one at the time)- finally persuading the suits that the England manager needed control over team selection, a development that would serve his successor Ramsey ( one of the players named in his squad for 1950) just one of them.

Even then there was a sneaking feeling that teams from the rest of Europe & South America were close to usurping England’s throne as ‘ kings’ & the time had come for change. To that end ‘B’ teams as well as some semblance of a youth football structure was introduced  post- Belo Horizonte, with the B-team going on tour just as their first team counterparts set off for Brazil. 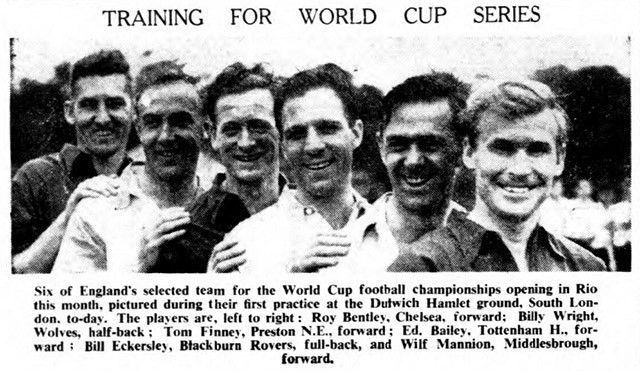 Would a similar such side of B-listers help nowadays? Of course we have the youth structure as outlined by Winterbottom still in place ( the Under 21s not on the scene until 1976), but why leave the ‘ standby’ players waiting by the phone when you can have them in & around World Cup preparations playing friendlies to keep themselves fit- a readymade solution should injuries occur to members of the first team at crucial stages of majour tournaments!

That such a scheme has been inactive since 1997 must now be of pressing concern- Sven-Goran Eriksson & Steve McClaren giving it just one match each to prove its effectiveness during their respective tenures. Is now the time to bring it back? Peter Taylor & David James says ‘ yes’, though there has been no official affirmative or negative response to the idea, the last such fixture having been a 3-1 win over Albania in 2007.

It paid dividends upon its introduction at least, as it could be said to have helped the process of qualifying for four subsequent World Cup tournaments in a row ( even if 1958’s appearance was somewhat overshadowed by the Munich air disaster which robbed England of the chance to make the best of some of Busby’s Babes- Roger Byrne, Duncan Edwards & Tommy Taylor tragically killed.

Just three years after their maiden World Cup,  a degree of rot could be said to have set in, the Three Lions well beaten by Hungary’s ‘ Magical Magyars’- a 6-3 home loss at Wembley quickly followed by a 7-1 tonking in Budapest the following year. What the sadly missing men from Manchester could have done to help overturn things will never be answered, though! 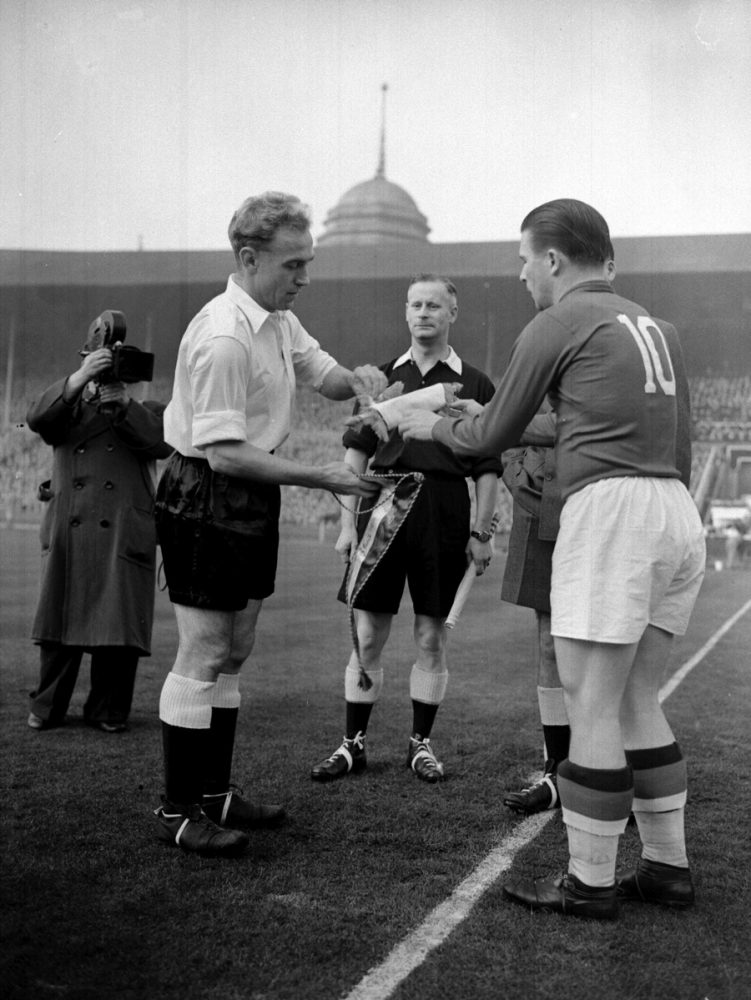 Nonetheless Roy & the boys must be glad not to have to put up with the dancing feet of Ferenc Puskas, though Mario Balotelli & Luis Suarez showed the world there’s a fair bit of tinkering to be done in the lab by the inventors of the game which ironically several rival nations can now justifiably claim to be better at! Blood, sweat & tears may well be called upon as the inquest begins into just why that is.

Undoubtedly the modern- day Brazilian journos won’t exactly be doffing their caps to England circa 2014 as they did all those years ago. But they & their colleagues worldwide now have legitimate grounds for poking holes in the famous white shirt- even the USA, past scourge of England, have outstripped them once again on the world stage.  A fact surely not lost on both our own media & those across the pond..

Somewhere, Joe Gaetjens must be laughing! For the men running the game in this country, though, its no joke- & they could do worse than look into the past to salvage pride in Russia in 2018 & indeed beyond following their rumoured forthcoming summit with the man in the dugout. In short, change needed just as badly now as in the Winterbottom years! 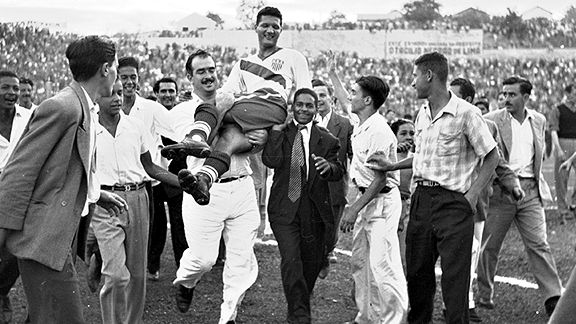