Cameroon international Patrick Ekeng dies after collapsing on the pitch 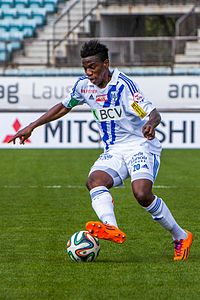 Patrick Ekeng, a Cameroon international representing Dinamo Bucharest at the club level, died on Friday after collapsing on the pitch during a league match against Viitorul Constanța. He was 26.

Ekeng fell on the pitch in the 70th minute of a televised Romanian league match between Dinamo and Viitorul. After just seven minutes of being on the pitch, he collapsed and was pronounced dead in hospital two hours later, from a cardiac arrest.

The Romanian Football Federation announced on Saturday that Romanian Cup final between Dinamo and Cluj would be pushed back a week to 17 May. It also added that all ages scheduled for the weekend will be postponed.

Reports in Romania’s  Gazeta Sporturilor suggests the ambulance that took Ekeng to the hospital was not equipped with sufficient equipment to treat him, and that it was initially unable to reach the pitch because it was blocked in by another car. Digisport claimed it took two minutes and 47 seconds for Ekeng to be taken to the ambulance, which they claim, was intended to be used purely for transportation