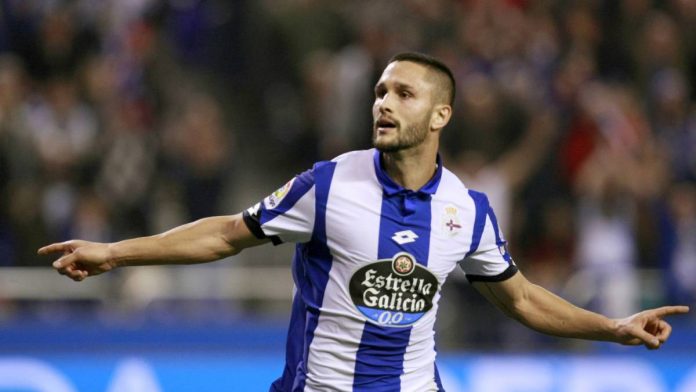 Burnley have made a £11.8 million bid for Deportivo La Coruna striker Florin Andone.

The Clarets turned their attentions to the Romania international after having had two bids rejected by Championship side Leeds United for Chris Wood.

Sky Sports says Watford, Fiorentina, Espanyol and Sporting Lisbon have all been linked with Andone, who scored 12 goals in 37 appearances for Deportivo last season.

Burnley are eager to replace striker Andre Gray who joined Watford for £18m earlier this month.

Andone began playing in Spain’s lower divisions before making his professional debut for Cordoba when he was 21-years-old. He joined Deportivo in 2016.

The 24-year-old earned his first full cap for Romania in June 2015 and was selected for the 2016 UEFA European Championships.

Manager Sean Dyche has been struggling to add to his squad this summer, with Jack Cork, Jonathan Walters and Phil Bardsley the only notable arrivals at Turf Moor.

Hull City midfielder Sam Clucas is another player on Dyche’s wish-list, although the BBC say an improved offer of £10m has been rejected.

However, Leeds striker Wood appears keen to force through a move to Burnley.

A source close to the player told the Daily Star: “Chris knows his stock has never been higher and wants a crack in the Premier League.

“But he also knows Leeds have to be realistic in their valuation and not hold out for a fee that is over the top.”