Hans-Joachim Watzke chief executive of Borussia Dortmund has slammed the Premier League by saying English football has lost its soul and he makes some valid points.

The Dortmund official has suggested that although the Premier League may be more entertaining to watch than other leagues, German football and the Bundesliga is head and shoulders above the English game in a number of ways.

The main point he makes is that English football has lost its identity through having too many foreign owners in control of English sides. Any wealthy individual can come in and buy a controlling stake in a Premier League side.

He suggests the German model is much better and it’s easy to see why. German clubs have to allow their members to own 51% of the club which means no third party can come in and buy a controlling role in a side.

“I am a little bit romantic, and that is not romantic.

In England people seem not to be interested in this – at Liverpool they are fine for the club to belong to an American.

But the German is romantic: when there is a club, he wants to have the feeling it is my club, not the club of Qatar or Abu Dhabi.”

This has helped to keep the Bundesliga in German hands and Watzke states that there would never be a situation in Germany like at Liverpool and Manchester United, owned by Americans, and Manchester City, controlled by an investment group.

He also makes a valid point in terms of the difference between the business models in the Bundesliga and the Premier League. English clubs are pumped as businesses with the fans paying higher ticket prices than ever before as clubs try to turn a profit.

He makes a good suggestion that this is something which risks alienating sections of young supporters who are effectively priced out of going to see their team play. Dortmund for example, charge just over £10 for an adult ticket while Arsenal will charge an adult over £100 to go and see a match on the day.

“Here, it is our way to have cheap tickets, so young people can come.

We would make 5 million euros more a season if we had seats, but there was no question to do it, because it is our culture.

In England it is a lot more expensive. Football is more than a business.”

The number of away tickets awarded to sides in the German league is also capped at 10% which allows the home side to enjoy the much larger majority of support which again hints at the idea of belonging and an identity to a club.

This is in direct contrast to the English method where sides decide how much the away ticket allocation should be based on the popularity of the match and the strength of the opposition. Another hint towards business overpowering passion. 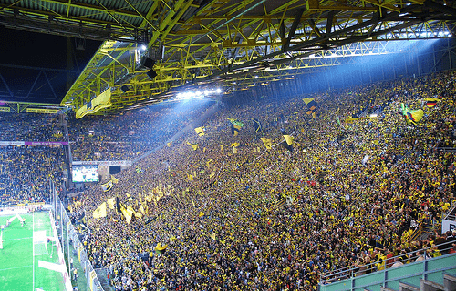 However, it is also important to consider that the larger attendances in the Bundesliga are enabled by a contrast in legislation. German clubs are still permitted to have standing areas whereas Premier League sides are required to have all seated stadiums.

This is what allows Borussia Dortmund to cram 26,000 fans into a single stand, just 9,000 less than the capacity of West Ham’s Upton Park. The disaster of Hillsborough in 1989 proved what can happen if the issue of standing at football is not taken seriously.

There are so many parts of the German game which are simply better than the Premier League. If you buy a ticket to go and see Dortmund play, that ticket also doubles up as your train fare to get to the ground.

Food and drink is also cheaper on average. At some Premier League grounds in the Premier League you will have to pay roughly 25% for a cup of tea, what it costs to go and see a live match.