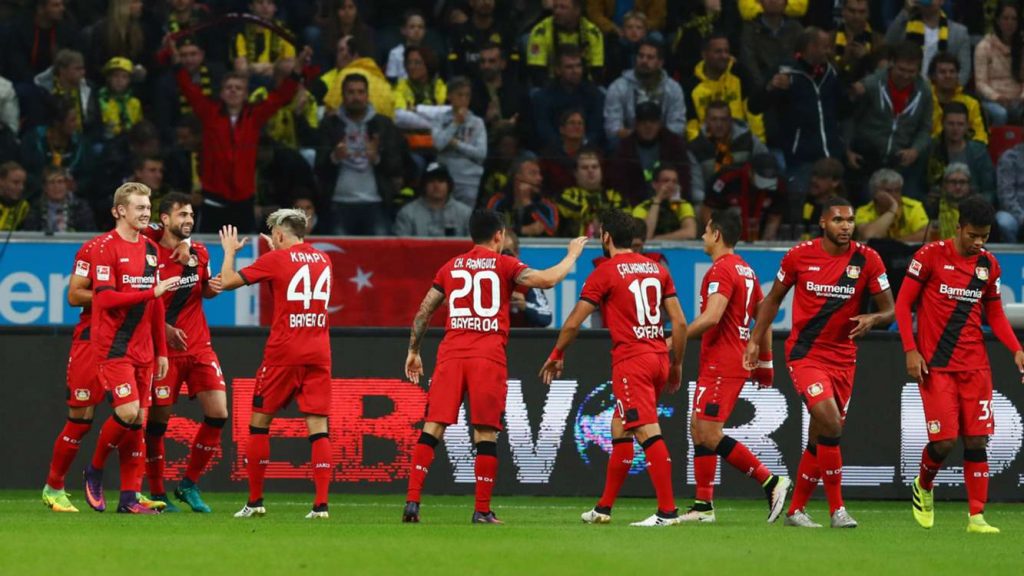 Roger Schmidt’s Bayer Leverkusen had their pressing boots on at the BayArena last night as they stifled Borussia Dortmund to register their third win of the season.

Leverkusen had won only twice in the league coming into the game, but mixed their high pressing game with effective counter attacking football to hand Thomas Tuchel’s Black-Yellows their second defeat of the season.

With Javier Hernandez and Admir Mehmedi leading the front press, Dortmund were stagnant in possession with their three-man back line barely finding a way into the midfield past Leverkusen’s press.

Behind Hernandez and Mehmedi, Hakan Calhanoglu and Julian Brandt played along the sides and halfspaces and were supported in the centre by Charles Aranguiz and Kevin Kampl. That effectively made up a front six for Leverkusen that blocked off Dortmund’s passing lanes down the centre.

Dortmund started off in a staggered 3-2-2-3 shape in a bid to bypass their opponents’ famous high press; Julian Weigl and Raphael Gurreiro played as the two number 6’s while Sebastian Rode and Gonzalo Castro were further ahead. Dortmund’s staggered structure was a move to help ball progression beyond Leverkusen’s midfield and into the wide areas where Christian Pulisic and Ousmane Dembele could cut inside and feed Pierre-Emerick Aubameyang.

This #passmap by #BVB is both a lot of homework for Tuchel and a big compliment to Roger Schmidt.
Found no way forward. pic.twitter.com/KsmH1z8YLK

But Leverkusen were the only team creating promising situations in attack from counterpressing by their front six, and forced Dortmund into playing among their centre-backs–as shown in the pass map above–as Weigl and Guerreiro were barely found in space in deep midfield. Leverkusen’s first goal came from a corner which was the result of a chance created by a counterpress; the goal forced Tuchel to tinker but the away side never really threatened for sustained periods of the game.

Die Werkself were organised off the ball and pressed as a collective; their 4-4-2 shape blocked Dortmund’s central access even after the away side changed to a 4-1-2-3 shape after the first goal. As shown in the following pass map, Leverkusen were vertical in possession, moving the ball forward quickly and fast transitions arising from their pressing movements disrupted Dortmund’s flow. The home side counter attacked effectively, and Dortmund are now left with more questions to answer following a dismal defeat which was sealed by Chicharito’s late goal.

No passing at the back at all means you're less easy to press against, perhaps?
Smart stuff by Leverkusen.#passmap pic.twitter.com/4oIHplRSYv

The loss now leaves Dortmund ruing a missed chance to close the gap on league leaders Bayern Munich, who were held at home by 1. FC Koln, while Leverkusen moved up to seventh, two points off the Champions League places and six behind Bayern.

1. Carlo Ancelotti’s Bayern had 30 shots, 19 of them off target, against Koln yet failed to pick up all three points, a first in the league this season. As expected, Anthony Modeste was Koln’s hero with a goal from his only shot of the game and the Frenchman is now the league’s leading scorer with five goals.

2. RB Leipzig’s fairy tale start to life in the Bundesliga continues after a 2-1 win over Augsburg on Friday night stretched their unbeaten run to six games. In the process, they became the first Bundesliga newcomers to remain unbeaten after their opening six games. Striker Yussuf Poulsen, who has been at the club since 2013, scored his first ever Bundesliga goal rounding up a fine week for Leipzig.

That's now 6️⃣ games unbeaten to begin the season, an achievement matched by no other newly-promoted side in #Bundesliga history 👏👏🙌 #RBLFCA pic.twitter.com/mmI3JWFb9v

3. Vedad Ibisevic’s brace for Hertha Berlin ensured Hamburg started life after Bruno Labbadia with an all-too-familiar defeat. Labbadia was sacked last week after collecting just a single point from the opening five games of the season, and new coach Markus Gisdol failed to stop the rot in Berlin with Hertha emerging comfortable 2-0 winners. The win takes Pal Dardai’s men above Dortmund into second and they now trail Bayern by just three points.

4. Markus Weinzierl’s Schalke are the only team with zero points this season and they host Borussia Monchengladbach later today. Schalke are famously known as the big bottlers, but a run of five losses in the first five games of the season has confounded even their worst detractor. However, the Royal Blues need to only look at their opponents Gladbach who were in a similar rough patch last season before dusting themselves down to qualify for the Champions League.