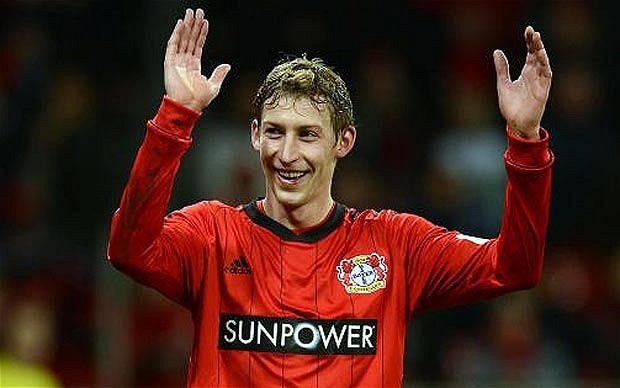 German referee Felix Brych’s name is mud in Hoffenheim after he awarded Bayer Leverkusen a decisive ghost goal in their Bundesliga match on Friday night.

Stefan Kiessling (pictured above) headed wide 70 minutes in, but the ball went through a hole in the Hoffenheim net. Brych awarded it as a goal before realizing his mistake when substitutes went and examined the side-netting to reveal the hole.

Attempts to make amends for this gaffe led to further farcical scenes. Brych awarded hosts Hoffenheim a penalty when Roberto Firmino was felled outside the area.

Egg continued to be on the official’s face, however, as Bernd Leno saved the spot kick.

Brych faced the media afterwards and insisted nobody on the pitch protested when he awarded the ghost goal.

“I had a slight doubt but the reaction from the players was clear – nobody was against [the decision],” Brych said.

“I checked with Kiessling. But no-one, not even him, said that it wasn’t a goal. The ball was in the net and for everyone on the pitch it was a legitimate goal.”

Kiessling’s ghost goal proved decisive as Leverkusen, coached by former Liverpool defender Sami Hyypia, won 2-1. Sidney Sam had opened the scoring in the first half. Sven Schipplock pulled one back for the hosts late on, but it was too late.

Hoffenheim director Alexander Rosen confirmed the club’s intention to protest. “It’s a scandal,” he said. “That was no goal. There are no two ways about it. We are definitely going to protest.”

Markus Gisdol, the Hoffenheim manager added: “It’s definitely bitter for us and something like this has already happened once, and that game was replayed so I think we’re going to see this game again. Anything else would be a joke.”

There is a precedent in Bundesliga history for incidents like this. In April 1994 Bayern Munich’s Thomas Helmer was awarded a goal against Nuremberg that never went in. After lodging an complaint, the game was replayed.