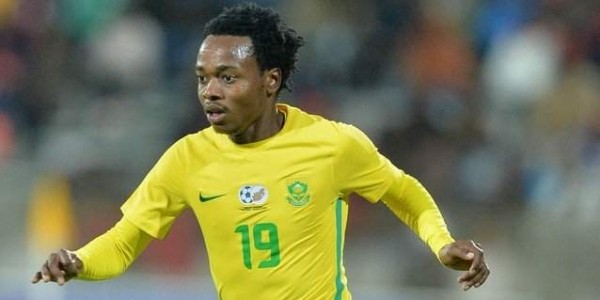 According to reports, Brighton are keen on signing Mamelodi Sundowns striker Percy Tau.

Tau was the joint top-scorer in South Africa’s Absa Premiership last season as he went on to smash 11 goals and also provided 13 assists.

As a result of his exploits, he won the Absa Premiership player of the season award.

In 2016, Tau also played a key role in helping Sundowns to overcome the odds and win the CAF Champions League, this competition is the African equivalent of the UEFA Champions League.

After finishing the Premier League last season in 15th spot.

Though this was impressive, considering that this was their first season in the top-flight since winning promotion, they will have to bolster their side this summer, especially up front if they want to survive next season.

Though Glenn Murray was impressive last season as he went on to score 12 goals, the Seagulls cannot view him as a long-term option up front as he is 35-years-old.

Brighton based publication The Argus confirmed that Brighton are tracking Tau though no offer has been made as yet.

“The Argus can confirm the Seagulls are tracking Mamelodi Sundowns forward Percy Tau, who was recently named top man in his domestic competition,”

“While no bid has been made, Albion remain interested in the South Africa international who also scooped Players’ Player of the Year honours recently in the top flight.”