Brendan Rodgers and Celtic have recently completed an unprecedented, unbeaten domestic season. Completing the domestic treble in a titanic battle with Aberdeen, Rodgers became the third manager in the club’s illustrious history to win a treble. While many may question it’s worth given Scottish football’s poor image of being non-competitive, going an entire season unbeaten is a record worth feeling proud about.

As the dust has now settled on Saturday’s win, Rodgers has now shifted the attention on improvement for next season and obviously, doing well in Europe is what comes next. 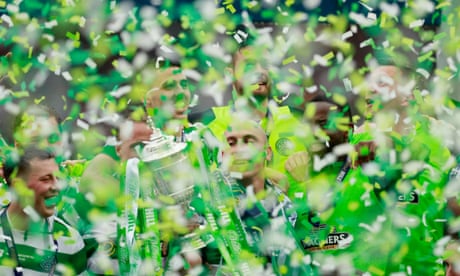 “We want to qualify, first and foremost. That will always be a challenge. Then we have to try and see what we can do. The gauge for us is to measure calmly once we’ve qualified. We would like to be in Europe for the second part of the season, whatever competition that’s in, and that’s a huge, huge ask for a club like ourselves.”

Rodgers tenure at Liverpool came to a halt after performances started going from bad to worse. He was fired and replaced by Jurgen Klopp. Naturally, a lot was expected from the Northern Irishman after Liverpool almost won the league in 2013/14.

Speaking about expectations, Rodgers added, “That’s what it’s like as a manager at clubs like Liverpool and Celtic, where the expectations are huge and you have to win. I want to impose a way of playing and working which doesn’t just happen with a click of the fingers. So, yes, it’s the pressure which is always there. You just manage it and cope with it. But then there is a part of you which has to press the reset button”.

Celtic will need to do well in Champions League next season to demonstrate progress because, as amazing as domestic success is, the side has maintained a monopoly in Scotland. If the Scotland side manages to qualify from its group, it would be truly remarkable.