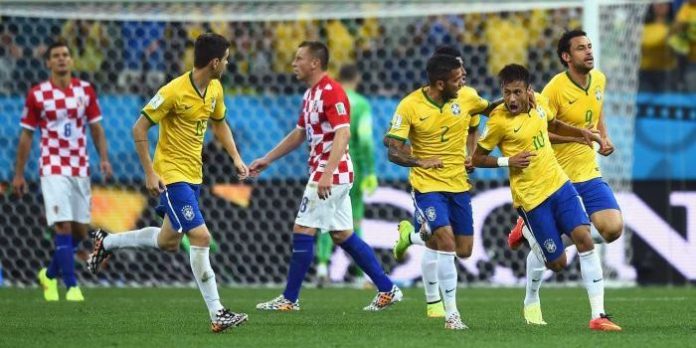 Brazil got their World Cup adventure off to a flying, albeit slightly controversial start, with superstar Neymar scoring twice in a 3-1 win over Croatia in Sao Paulo.

The 22-year-old attacker, playing just behind lone striker Fred last night, equalised for the Selecao midway through the first half after the Croatians had grabbed a shock lead via a Marcelo own goal.

The aforementioned Fred was at the centre of the highly debatable second Brazil goal, as he fell practically unchallenged to win his side a penalty, with Japanese ref Yuichi Nishimura roundly criticised for his performance throughout the match. Barcelona man Neymar stepped up to score his second of the game, with Croatia now needing a miracle to secure an opening night win.

Unfortunately for them, this miracle failed to materialsie (although had it not been for yet another dodgy decsion from Yuichi, they might have had an equaliser), and it was Chelsea midfielder Oscar who had the final word, barrelling through the middle of the Croatian backline, and sending a shot in the bottom right hand corner.

Check out the full highlights below (after the 30 second ad) – make sure you bookmark our extensive World Cup 2014 guide, and let us keep you updated on all things Coppa del Mundo!