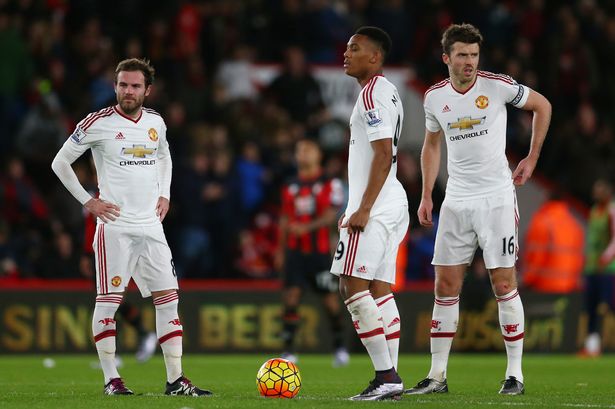 Manchester United’s miserable week was compounded as they followed up their Champions League exit in midweek with a 2-1 defeat against Bournemouth at the Vitality Stadium on Saturday. Eddie Howe’s team beat defending champions Chelsea last week, and proved that that was no fluke with yet another stunning victory.

United had the chance to go level on points with Manchester City and Leicester City at the top, but instead remained in fourth. They could slip down to fifth if Spurs beat Newcastle United on Sunday.

Here are three talking points from the game:

There was a sense before the game that United were there for the taking. Bournemouth were the side higher on confidence and a victory didn’t look as improbable a result as it would have at the start of the season.

The Red Devils came into this game with 9 first-teamers out injured. The defence especially was completely depleted as Van Gaal named Cameron Borthwick-Jackson, Guillermo Varela, Paddy McNair and Daley Blind in the back 4. Matteo Darmian, Chris Smalling and Luke Shaw are all out injured, while Phil Jones was only fit enough for a place on the bench. In midfield, Morgan Schneiderlin’s calm and collected presence was conspicuously missing as well.

For a team that has spent £250 million in the past two transfer windows though, there is a stunning lack in depth. This is something Van Gaal will want to address in the upcoming January transfer window, as they need two top-quality players in every position to put in a genuine challenge for the league.

2) Slightly unfortunate start, but United’s lack of fight was startling

Bournemouth scored inside the first 100 seconds when Junior Stanislas’ corner directly went in. The wind bamboozled David De Gea as he flapped wildly but failed to keep the ball out. United looked better as the half wore on and created some decent openings, only for Artur Boruc to deny them with some stunning saves. They did get the equaliser before the break though, through Marouane Fellaini.

This should have been the cue for them to kick on after the break and take the game by the scruff of the neck. Instead, it was Bournemouth who took the lead once again through Josh King, a product of United’s youth system. Following that, the visitors completely buckled and looked devoid of any ideas. If anything, it was The Cherries who looked like extending their lead, and they would have done so had Glen Murray not blazed over with only De Gea to beat.

There is a clear lack of motivation and fight among the United players. After crashing out of the most prestigious competition in Europe, one would have thought that they would have wanted to make a strong statement in their next game. Instead, they went out with a whimper once again.

3) Bournemouth in dreamland, but can they stay up?

When Chelsea and United were competing in the Champions League final in May 2008, Bournemouth had just been relegated to League Two. Now 7 years later in their inaugural season in the top-flight, they’ve beaten the former two back-to-back. It’s an incredible story which has thrilled us all. 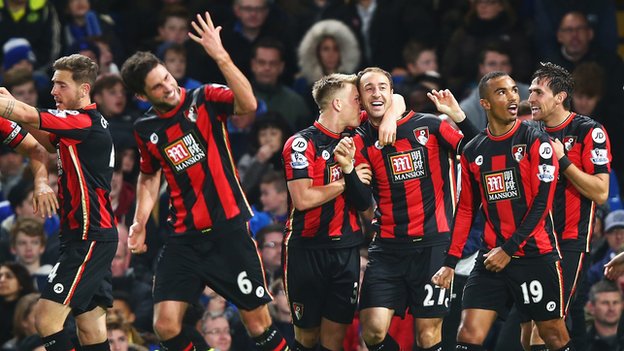 With last night’s victory, Bournemouth leapfrogged Chelsea into 14th place. It remains to be seen though, if they can continue picking up points on a regular basis with their open and expansive style of football. Their target for the campaign is still very much survival and getting to the 40-point mark will be Howe’s top priority. They are extremely high on confidence but must keep their feet firmly on the ground at this point in time.