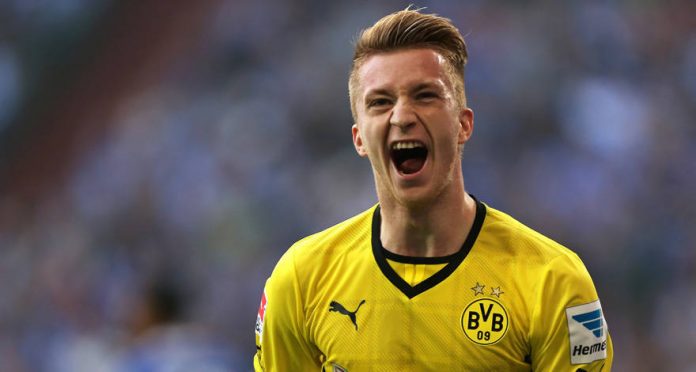 Borrusia Dortmund continued their resurgence after a disastrous start to the season with a convincing 3-0 win over Schalke in the Ruhr Derby. Reus, Mkhitaryan and Aubameyang scored three late goals to send Dortmund to 9th in the table.

The hosts started impressively with high tempo and quick passing. However, Klopp’s side lacked the finishing touch in the first half as the home side squandered as many as six chances to go ahead.

Jurgen Klopp’s men were looking to make it to four wins in a row in the league and will be happy with the way they have turned it around since the winter break. Goals from Reus, Mkhitaryan and Aubameyang lifted the mood at the Westfalenstadion as the German giants prepare to welcome Juventus for a crunch second leg tie in the Champions League.

Aubameyang opened the scoring on 78 minutes as Mkhitaryan doubled the lead a minute later following a fast break away. Reus clinched the three points with another late goal on the 86th minute.

Dortmund star Reus confirmed that the side have done well to turn their season around and they could not afford to lose to Schalke.

“[The derby]’s basically in your blood. Against Schalke you know that you just have to run and fight until you drop and you simply can’t lose,” the 25-year-old forward told the Bundesliga’s official website.“That’s been clear to me for years now and I go about this game accordingly. As a team, we know that as well. The derby just means so much to the fans and for the area here. It’s obvious, really, but we just have to give it everything we have and win the game.“Playing at home we obviously want to win the game. It definitely won’t be easy, that’s for sure. Schalke have looked very solid recently. They have a very defensive style, where the back line defends high up the pitch when they have the ball.“We’ll have to really do our homework on them and prepare for them and, although our chances are good, I’d say it’s still 50-50 at the moment as to who’ll come out on top.”The Germany international signed a new deal at Dortmund earlier in February, ending the speculations about a potential move away from the club.“There was a lot of speculation … a lot was said and even more was written about what I would and wouldn’t do but, at the end of the day, it was and still is important for me just to know that I’m happy. That’s simply the thing that concerns me most and it was for that reason that I chose BVB,” he added.“I feel really happy among the team and the coaching staff. My family lives here, my friends live here. Everything I’m used to is right here and, again, that’s really important for me. It’s also worth a lot to me in my life. Life beyond football does exist, after all.“We’ve made great strides in the last few games, which we wanted to do. Since the beginning of the second half of the season, with the exception of the game against Augsburg and, to an extent, Leverkusen, we’ve progressed in every game.“The first half of the season was basically a disaster for us and enough has been said about it. It’s not about ironing out the creases in the season so far or salvaging what can still be salvaged; what we have to do is just extract the maximum from every game we can and we’re ready for that.”