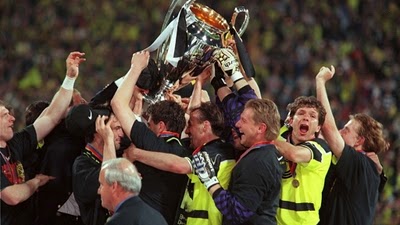 Borussia Dortmund’s resurgence at the summit of German football this season has flooded back fond memories of the entity’s heyday in the mid-nineties where they shocked the world and became kings of Europe in 1997.

Nobody outside the doors of the Westfalenstadion could have envisaged what was to occur that night in Munich where in front of their home nation, Die Borussen toppled Italy’s renowned force Juventus and brought the European Cup back to German soil for the first time in fourteen years.

Although many fantasised about the possible reality of the club becoming a predominant force in European football, it seemed to be little more than a pipe dream. Borussia had endured heartache years prior as they missed out on a number of opportunities to win their domestic league. The Bundesliga’s competiveness to this very day isn’t exactly new. Year in, year out, teams are scrambling up and down the table to squeeze in as many points as possible as just one slip up can define an entire campaign – Borussia knowing that all too well. Just before they clinched their first league title for 32 years in 1995, their fans were left dumfounded as they missed out on the aforementioned via goal difference to Stuttgart in 1992. It was a fantastic endurance race between both clubs along with Eintracht Frankfurt who certainly played their part in one of the Bundesliga’s most gripping campaigns. However, there is never an accolade that follows second best and Dortmund was left pondering ‘what if?’

Nevertheless their return to prominence domestically was a far cry from those times over a decade prior where they were embroiled in financial turmoil as well as depletion on the pitch – surviving relegation by the skin of their teeth in 1986.

In can be argued that the club’s rise to the summit of the sport started as far back as 1989 when they clinched The German Cup for the second time in its history. A resounding 4-1 victory over Werder Bremen in the nation’s capital installed new belief into the hierarchies and fans alike. A young Andreas Moller was emerging and his ability to pull the strings in midfield gave such creative impetus going forward. He departed in 1990 to return to Eintracht Frankfurt but his affiliation with the Dortmund side would reunite and play a monumental role in future aspirations.

The team began to develop over the course of the nineties as they began to compete for the league title more often than not.  The implementation of Coach Ottmar Hitzfeld in 1991 was massive – he masterminded the team’s cohesion and togetherness in conjunction with his astute tactics. His dealings in the transfer market lay key foundations such as the acquiring of Karl-Heinz Riedle from Lazio,  Matthias Sammer from Inter, Steffen Freund from Schalke and the resigning of Andreas Moller – just to name a few. He implemented his philosophy into the team and imbedded the personnel who he felt were efficient enough to undertake their duties. It paid off with Dortmund finally clinching their first outright Bundesliga title in 1995 (since its unification and the abandonment of the Obligen) – then succeeded in its defence it the following year.

They were now the rulers of their domestic game. With being champions, along came the honour of representing Germany in club football’s most prestigious competition, the UEFA Champions League. The club made its bow in the tournament on 13th September 1995 and were up in arms with jubilation within a minute when Andreas Moller put the hosts in front against Juventus at a packed Westfalenstadion. The joy was short lived as they were eventually humbled 3-1 by the runners-up of the previous campaign.

However, the club really rubberstamped their reputation to the rest of Europe in the penultimate group fixture, the return tie with the Italians and conjured up an efficient 2-1 victory away in Turin thanks to goals from youth products Michael Zorc and Lars Ricken. Die Borussen qualified for the quarter-finals but were given a reality check by the defending champions Ajax.

Their inaugural season at Europe’s premier dining table was a real learning curve for what was to come. Although left disappointed, they reclaimed their domestic league, giving them another crack at club football’s Holy Grail. Hitzfeld, renowned for his efficient nature, made two unfashionable signings that were masterstrokes – Paul Lambert and Paulo Sousa who operated just in front of the back four. Their influence, particularly on the European stage helped suffocate the opposition’s creativity that worked to the team’s advantage.

Skipper Matthias Sammer had just come off the back of a European Championship win with Germany where his stellar performances culminated in him being awarded the Ballon d’Or. His form certainly rubbed off with his peers as the understanding between himself, Jurgen Kohler and Martin Kree was exemplary. Not forgetting Stefan Klos in goal who made a vast number of vital saves throughout the duration of the competition.

The attack consisted of a front-two involving Riedle and Stephane Chapuisat as Andreas Moller played just behind. Paulo Sousa missed the majority of the competition early on due to injury but would be an integral figure in the latter rounds. Paul Lambert performed his role magnificently in front of the defence and turned out to be one of the signings of the season in Germany.

Everything was in place for the champions to give it their all in the competition and they qualified with ease from their group along with Spanish champions Atletico Madrid. They easily disposed Auxerre in the quarter-finals which set-up a mammoth of a tie with English champions Manchester United. Many were tipping The Red Devils to lift the cup themselves that year. Sir Alex Ferguson would never underestimate a team but even he was caught off guard by The Black Yellows.

Hitzfeld was unimpressed with the cheap goals that his side had been conceding in the earlier ties. It was an uncharacteristic flaw and he was keen for the problem to be quelled if they were to beat the English giants. His methodology of playing through the middle remained intact and it had been their main artillery for their success beforehand. The preparation for the game was hit with injuries as Sammer, Riedle, Chapuisat and Kohler all missed the first-leg. Amazingly it wasn’t to matter as the underdogs came out on top with a 1-0 victory thanks to Rene Tretschok and followed up with a repeat score-line at Old Trafford in the return leg thanks to Lars Ricken. Borussia were Champions League Finalists. The underdogs from Germany may have had a favourable run to the semi-final, yet they proved their doubters wrong by soundly beating England’s best.

Juventus lay ahead in the showpiece final which would be at Munich’s Olympic Stadium. An opportunity of a lifetime as the stadium became a sea of black and yellow as fans made the trip down south making the home of the nation’s giants Bayern Munich theirs. Their opponents had been impressed with their encounters the previous season, particularly with Dortmund showing their credentials with the win in Turin. Under the influence of an emerging Zinedine Zidane, it was seen as a formidable ask for the Germans to pull it off. They didn’t just pull it off, they did it in style.

Hitzfeld has to be praised for his tactics. The use of Sousa and Lambert ushered the Old Lady’s creative guile and the first-half was pretty much dominated by the team in yellow. A Karl-Heinz Riedle brace put them 2-0 up before the break. His first showcased the capabilities of the man. He did brilliantly at the far-post to bring down Paul Lambert’s cross from the right with his chest before prodding the ball past Angelo Peruzzi. His second came via his head from a Moller corner that gave Italy’s number one no chance.

Juventus had their moments and clawed a goal back thanks to Alessandro Del Piero via the bench but the Italian’s belief was to be short lived. Lars Ricken who was 20-years of age at the time had only been on the pitch a matter of seconds after replacing Chapuisat and ended up looping the ball over Peruzzi’s head via Moller’s diligent through-ball that sliced the Italian back-four in two. In what was his first touch, he put the icing on the cake with the goal of the night as the mass jubilation of the Germans was exhibited – particularly an over exuberant Hitzfeld on the touchline. Borussia Dortmund, yes Borussia Dortmund, became the kings of European football.

Although their domestic form suffered, losing the Bundesliga to Bayern Munich, the achievement of winning the European Cup eclipsed anything and everything that had ever achieved before. All the success and groundwork that was laid nearly a decade or so prior at the inception, resulted in the team in yellow and black lifting the most prestigious prize in club football.