Real Madrid are ready to sell Arsenal target Isco after manager Zinedine Zidane has said there are too many midfielders in the first team.

The club policy of the 2016 UEFA Champions League winners is that players must leave before any signings are made this summer.

Spanish newspaper AS are reporting because Paul Pogba will cost Manchester United £100 million and Manchester City paid £50 million for Leroy Sané, Isco is valued somewhere in between.

The reason the La Liga giants want to sell Isco is because Zidane is happy with 20-year-old Marco Asensio in the first-team.  The former-Mallorca youngster was signed by Real Madrid in 2014 but has spent the past two seasons out on loan, at Mallorca and Espanyol respectively. 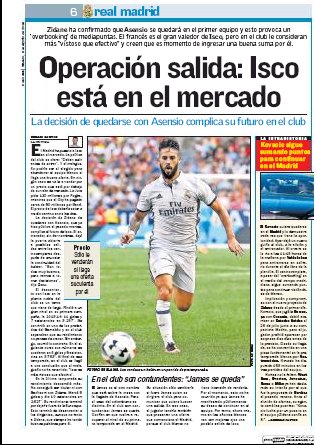 Zidane confirmed on Tuesday that Asensio will be part of the first team for the upcoming season but has put question marks over the future of Isco at the Bernabéu.

The former French star hinted that players may need to be sold this summer, quoted by AS as saying:

“They are all very good, but we will make decisions.”

Isco has been with Madrid for three seasons since joining from Málaga and has been an important part of the squad.  He has particularly shown his talent in replacing Gareth Bale when the Welsh star has been sidelined.

This comes as potentially positive news for Arsenal who have been linked to the Spanish international this summer.  The 24-year-old could solve Arsène Wenger’s problems down the right wing.  The Gunners boss has already been strongly linked with Leicester City’s Riyad Mahrez this summer.  Both players offer a goal threat and creativity down that side.

However, Mahrez has been linked for £37 million whilst the Spanish newspaper is suggesting that Isco could cost any buyer around £75 million. Wenger has been very cautious with transfer fees in the past with his record signing being Mesut Özil for £42 million from Real Madrid three years ago.

Isco has scored 15 goals and assisted 22 in his 97 La Liga matches with Real Madrid.