It sounds like a recipe for disaster, rather than one for redemption, but if Moyes is prepared to take the massive step and drop his out-of-form striker, it could just be the move that reinvigorates not only his team, but also the club and fans as well. 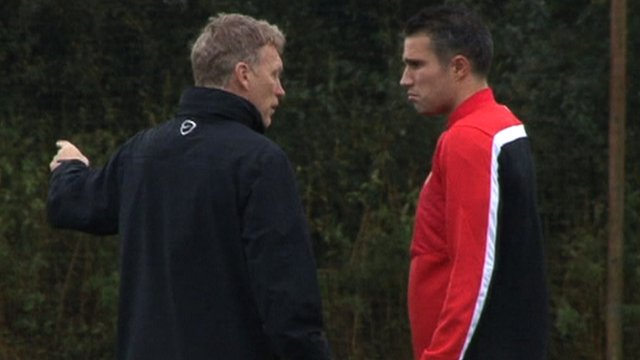 It’s not a difficult case to make that the Dutchman, whose goals secured the title for United last year, has been a pale shadow of that during this term. His relationship with Wayne Rooney appears to have gone backwards, as is supported by an analysis of United’s dispiriting first leg of the tie against Olympiakos.

In that game Rooney received just a single pass from van Persie. It arrived from the kick-off that followed the hosts first goal. There have also been recent rumblings about how the Dutchman fits into the style of play Moyes has deployed. This was also manifestly clear again after the game in Greece when van Persie complained to a Dutch media outlet that his team mates were taking his space.

If he took this bold step, all sorts of other things could drop into place. Firstly, he could move Rooney further forward as the focal point of the United attack. Doing that would allow Juan Mata to move across from his miserable and unproductive exile out on the wide of midfield and then slot the energetic and enthusiastic Danny Welback into the space vacated by the Spaniard.

When van Persie was substituted against West Bromwich Albion, in danger of being sent off after a booking followed by a particularly reckless challenge that put him on the brink of dismissal, the introduced Welbeck added new impetus to the team and they skated to a comfortable 3-0 victory – just the sort of score required tonight.

It’s not only on the playing field that Moyes could gain however. Since joining the club, the shadow of his predecessor has hung heavily over him, and until the squad is seen as ‘his’ rather than Ferguson’s, he will remain not quite accepted. A bold statement such as dropping van Persie could be just the move required to assert his authority and declare that he was going about business in his own way.

Truth be told of course, it’s unlikely that the Scot would consider such a move and it’s highly likely that the team put out tonight against Olympiakos will be broadly as before. United will probably garner a sufficient victory against the Greek club who may well cave in under the pressure if United manage a fairly early goal.

With qualification gained, there’ll be an inevitable temptation to say that all is now good in the Manchester United garden. It may be that it works out that way, but sometimes doing nothing is a bigger gamble than doing something, and if Moyes fails to grasp the nettle, it may be something he regrets come the end of the season.