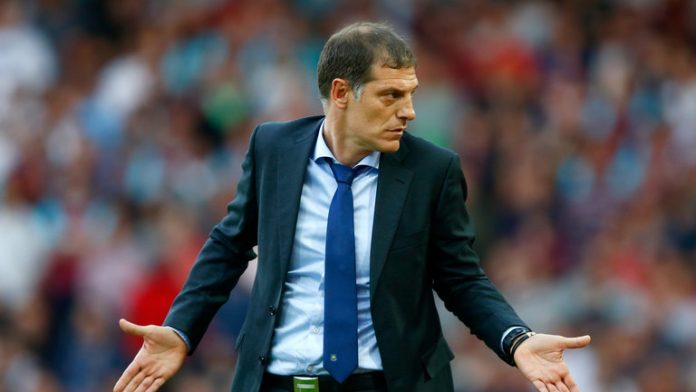 West Ham boss Slaven Bilic is staying focused on the job at hand, despite reports his position is under threat.

Defeats by Southampton and Manchester United in their opening two games has left the Hammers rooted to the foot of the Premier League, sparking rumours the Croatian may be replaced at the club by Rafa Benitez.

However, Bilic appeared unconcerned by the news as he told Sky Sports he was still interested in adding Sporting Lisbon star William Carvalho to his squad.

“We will see what happens in the last week of the transfer window, if somebody is going to leave or come in,” said Bilic.

“Like most clubs we are ready to do something, both ways in case something good comes on our plate.

“I’m happy with the squad now. I would like to have one more and after that, if somebody leaves we have to fill that gap because we don’t have a big squad.

“This is our squad for the season, or at least until January. We are happy, but if somebody leaves we have to be ready to act.”

West Ham visit Cheltenham Town in the Carabao Cup on Wednesday, before travelling to Newcastle United in the Premier League on Saturday, and Bilic is keen to kickstart his team’s season.

“We need a win to get that boost, but it was a completely different feeling after the defeat at Manchester United and at Southampton, because there were a lot of positives on Saturday when we came back from 2-0 down with 10 men to equalise – but of course we have zero points,” he added.

“If we do some changes it is because we have a good squad and okay, with a little bit of an eye towards the Newcastle game, but we will of course put a strong team out.”