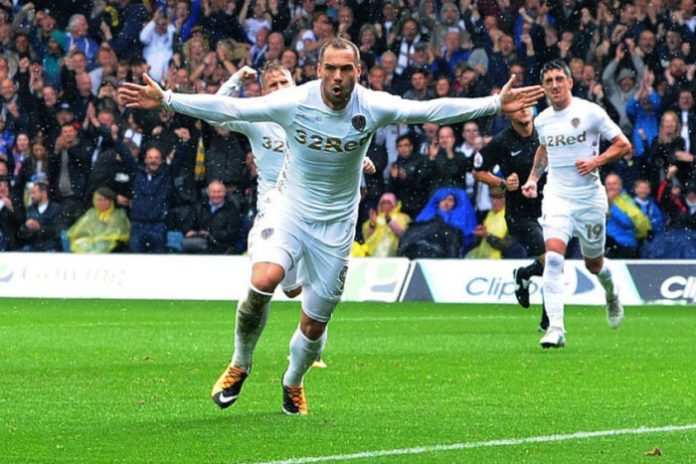 Leeds United travel to take on Cardiff City on Tuesday night in a top-of-the-table Championship clash, with the Yorkshire side getting a double boost ahead of the game in Wales.

Both Pontus Jansson and Pierre-Michel Lasogga look set to feature for the current division leaders, in what will be a boost to their chances of recording three points against the Bluebirds.

The German striker, who is on loan at Elland Road from Bundesliga side Hamburg, became a father on Friday night as his girlfriend gave birth to his daughter.

However, Thomas Christiansen has praised Lasogga for making himself available for the game against Ipswich Town on Saturday, in which he scored – with the centre forward not revealing the new arrival to his team-mates until after the 3-2 win.

“From my point of view it was very nice and showed how professional he is, by not wanting to take the attention away from anyone,” the Leeds boss told the club’s official website.

“I appreciated that a lot, he responded with a goal and it was very important from the team on Saturday.”

Lasogga has returned to Leeds and is expected to play a role against Cardiff on Tuesday night.

At the other end of the pitch, Jansson sat out the victory over Ipswich, with Christiansen admitting that he did not want to risk the Swedish enforcer against the Tractor Boys.

“That was because he had a muscle problem and I didn’t want to risk him,” the Leeds boss said in a press conference, as reported on the club’s Twitter account.

“He was able to be in the squad but my decision was to leave him out.”

Given that Jansson was available for the Ipswich game but was omitted as a precaution, it seems likely that the former Torino centre-half will return to the fray in south Wales.

Irish youngster Conor Shaughnessy has impressed at the back for Leeds as injuries have stacked up, but the more-experienced Scandinavian’s presence would certainly be a boost for the visitors.

Meanwhile, Everton loanee Matthew Pennington was also an unused substitute against Ipswich and as such Christiansen’s option at the back look a lot more healthy now than they have done at any point this season.