Benfica midfielder Anderson Talisca is closing in on a move to the Premier League outfit Liverpool.

Jurgen Klopp is looking to add another attacking midfielder to his side and the Brazilian has been identified as an ideal candidate.

According to latest reports from the Portuguese media (via Sportwitness), Benfica have agreed a 20 million pounds deal with Liverpool and Wolves for the technically gifted South American.

The left footed Benfica star can operate as a winger or centrally behind the forward. Liverpool are lacking in left footed attacking midfielders right now and Talisca will add some much needed balance and a different dimension to Klopp’s attack.

Talisca scored 9 goals for Benfica last season and could line up alongside the likes of Wijnaldum, Mane, Coutinho and Firmino next season.

Despite agreeing a fee, the main issue will be to secure a special work permit for the Brazilian before the transfer can be completed. Talisca is ineligible for the permit based on national team appearances, but he can still get one based on the ‘exceptional young talent’ criteria. 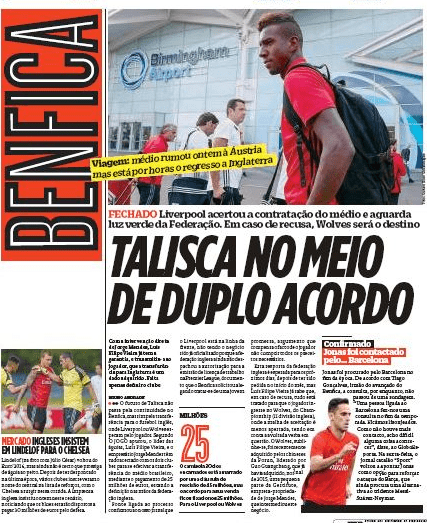 The report from Portugal claims that the player wants to complete a switch to Anfield, but if a work permit is denied, he will join the Championship outfit Wolves instead. Apparently the permit rules in the Championship are not so strict.

Apparently the Benfica president has also informed the player that he is moving to England and they should find out soon if it will be Liverpool or Wolves.

Chelsea were also interested in the Brazilian earlier. Jose Mourinho wanted to sign the player last season. The Portuguese manager is a big admirer of the player and claimed that the player would play for a big English club if not for work permit issues.