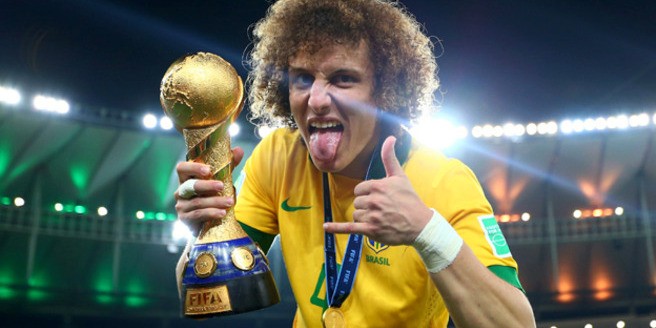 German giants Bayern Munich are set to launch a £35 million bid for Chelsea’s highly rated defender David Luiz, according to the Daily Mirror.

The 26-year-old played an integral part in Brazil’s Confederations Cup win, where his incredible goal-line clearance against Spain in the final was one of the pivotal moments of the match.

Luiz is also targeted by Ligue 1 champions Paris Saint-Germain while La Liga giants Barcelona are also interested in the player, who has a contract at Chelsea till 2017.

The big-haired stopper is a dynamic character and is seen by the Chelsea hierarchies as the future leader to replace John Terry at the club.

Luiz is not only very strong in the air but is equally comfortable on the ball too, which prompted Chelsea’s previous manager Rafael Benitez to often use him in the defensive midfield role last season.

It has been reported in the UK media that Chelsea boss Jose Mourinho doesn’t rate him highly enough and could be looking to sell him in the summer.

The Portuguese is not too convinced of Luiz’s defensive abilities as the Selecao star is often prone to making ghastly errors. Though, his overall brilliance covers up the defensive frailties, Mourinho may sell him to raise the fund, as he looks to sculpt the squad according to his own taste.

Bayern’s defensive record is envy for all the top European clubs, having only conceded 18 goals last season in the Bundesliga. Luiz certainly would add something extra to that already well-knit defensive unit at the German club, and would seamlessly fit into Pep Guardiola’s favoured 4-3-3 system.

According to the Catalan based newspaper, Sport, Guardiola has instructed the Bavarians’ sporting director Mathias Sammer to seriously consider making formal offers for Luiz. The officials of the German club have already contacted the player’s agent to let know their willingness to land the defender.