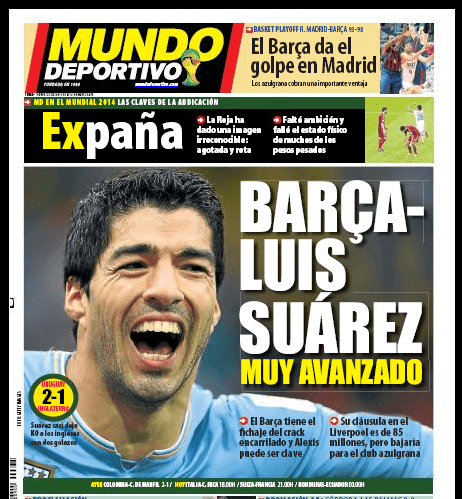 This is the front page of Mundo Deportivo today. It basically says negotiations between Barcelona and Liverpool are going on at an advanced level.

Yesterday, Catalan newspaper Sport published a report that says some board members of Barcelona have discussed with president Sandro Rosell about the possibility of signing Luis Suarez, who is also a reported target of Real Madrid.

Barcelona had shortlisted plenty of top class strikers/players like Robin van Persie and Eden Hazard, but Suarez ended up being the chosen one and according to Mundo Deportivo sources, the negotiations are at a very advanced stage.

They speculate that Suarez has a €85m buyout clause on his contract, which would be lowered to €20m at least, should Barcelona or Real Madrid came knocking.

Furthermore, Barcelona are plotting to use Liverpool’s interest in Alexis Sanchez to good effect and wants to use the Chilean to sweeten the deal.

Well, Spanish press might be day-dreaming here. Liverpool are in absolute commanding position here – with Champions League returning back to Anfield next season, plus Suarez pledging his loyalty as well, can’t see the Reds doing such a silly business.

Real Madrid seems to have given up on galatico signing for this summer and could be willing to meet Karim Benzema’s wage demands and renew his contract.