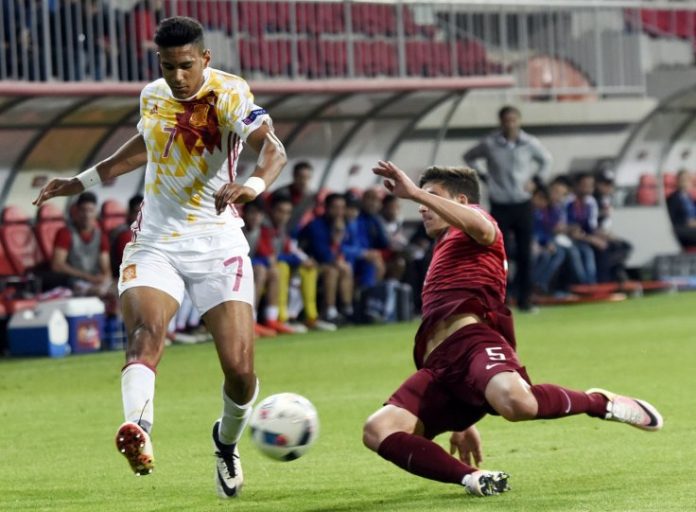 AS Monaco have confirmed they have completed the signing of Jordi Mboula from Barcelona on Wednesday.

The 18-year-old striker, who has a Congolese father and a Spanish mother came up through the ranks of the Catalan club’s famous youth system, La Masia. The teenager has left the La Liga giants and signed a five-year contract with the Ligue 1 outfit.

A statement on Monaco’s official website read, “AS Monaco is pleased to announce the recruitment of Jordi Mboula. The young striker (18) trained at FC Barcelona has signed a five-season contract as from 1 July 2017, when he will join the professional group.”

The Spain Under-19 international scored a Lionel Messi esque-goal in the UEFA Youth League tie against Borussia Dortmund in February. His style of play has seen him dubbed as the next Thierry Henry, reports Calciomercato. The Frenchman impressed during his time at Camp Nou and was a legend at Arsenal.

Mboula was set to be promoted to Barcelona B team for the 2017/18 season. However, he has decided against continuing with the Spanish club and completed a switch to Monaco. The player is likely to play for their first team next campaign.

The Spaniard expressed his delight after completing a switch to Monaco and thanked Barcelona for their support during his time at the club.

“I decided to start a new phase in my career by joining AS Monaco. I was very proud to have defended the colors of FC Barcelona, ​​a club that has given me all its support since I “integrated it at the age of nine,” Mboula told Monaco’s official website.

“It was there that I trained myself as a player but also as a man. Today I feel ready to join AS Monaco, one of the biggest clubs in Europe.”