Manchester United defender Matteo Darmian has been linked with a move away from Old Trafford since the summer.

The Italian international has not been a part of José Mourinho‘s first team plans this season, and the likes of Inter Milan have been following him as a January transfer target.

The latest club linked with the 26-year-old is Barcelona. Apparently, the Spanish champions are looking to replace Aleix Vidal in January and are looking at few experienced full-backs. The likes of Srna, Piszczek, Ivanović and Lichtsteiner have also been named as probable targets, along with Darmian. 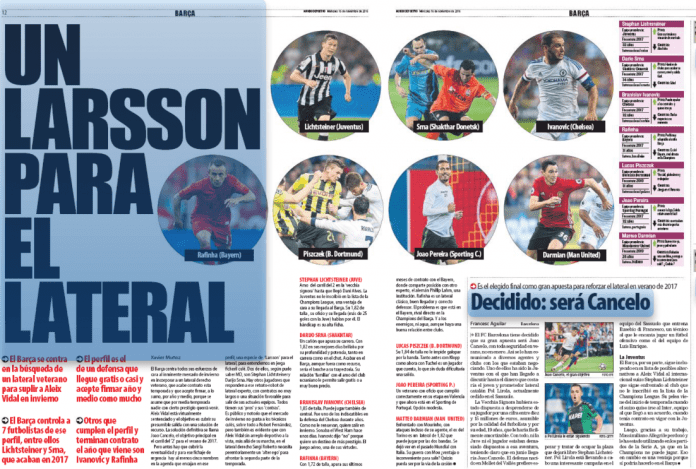 Mundo Deportivo claims that Darmian has had a clash with Mourinho, and therefore the Spanish giants have a good chance of landing him if they can present a reasonable offer. As per their report, Darmian and Mourinho are at war, and the player’s agent isn’t too happy with the Portuguese manager, either.

The opportunity to join a club like Barcelona is a huge attraction for any player. If there is a concrete offer in January, Darmian is surely going to consider it seriously. Although he might not get a lot of playing time at Camp Nou either, the chance to play for the best club in the world is a major incentive.

Mourinho has been using a natural winger as his right-back all season, and it is evident that he does not trust Darmian as a right-back. Furthermore, his relationship with Mourinho — if Mundo Deportivo‘s claims are true — could force him to consider the move.

Overall, it seems like a favourable situation for Barcelona if they decide to pursue him. Manchester United could also look to cut their losses and get rid of Darmian and sign someone Mourinho prefers. Darmian has a contract until 2019 and is currently earning £60,000 per week at Old Trafford.

Recently, Mirror revealed that Darmian is confused as to why he is not part of Mourinho’s first team plans and is considering his future at the club.