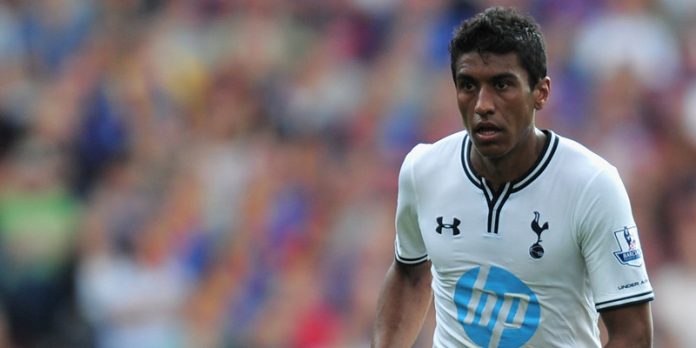 Perhaps the unlikeliest transfer rumour at the beginning of the transfer window, Sky Sports have reported that Barcelona are interested in bringing former Tottenham player Paulinho to Camp Nou. The Brazilian is currently playing in the Chinese Super League with Guangzhou Evergrande.

Paulinho has a £35m release clause in his contract with the Chinese Super League side, and it is believed that the Catalan side is not interested in paying that sum for the 28-year-old. Barcelona are keen to strengthen the midfield and have been linked to PSG’s Marco Verrati.

What complicates matters more for Barcelona is that a potential move for Paulinho would mean Guangzhou “will have to pay a new 100 percent tax if they sign a foreign replacement for Paulinho”, which would make the Chinese side even more reluctant to sell the player.
Meanwhile, manager Luiz Felipe Scolari has also played down rumours of the player moving anywhere.
“Paulinho is not going to move from Guangzhou Evergrande and, for those who do not know it, he has a €40m release clause,” Scolari said to Mundo Deportivo. “At this moment it is not easy for any Chinese team to let an important player go because it is difficult and very expensive to sign a replacement due to new tax rates.”

Paulinho joined Guangzhou for £10m in June 2015 after he played 45 Premier League games across two seasons for Tottenham.

Despite the league being famously uncompetitive, the Brazilian has enjoyed a brilliant spell, winning the title in both his seasons in China. Currently, too, his side is four points clear at the top of the Chinese Super League table.

The Chinese mid-season window will close on July 14.