Barca go back to the future to appoint Luis Enrique 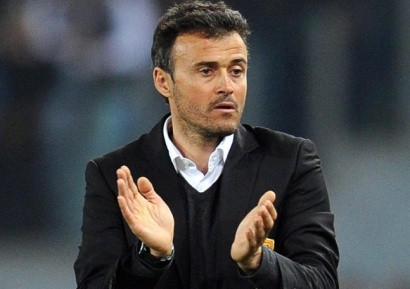 After what always seemed destined to be a failure, Barcelona have reverted back to form and appointed former skipper and B team manager Luis Enrique to replace the Gerardo Martino who left the club by mutual consent over the weekend, halfway through a two-season contract with the Catalan club. The move to appoint Enrique represents an attempt to return to the path laid out so successfully under the tenures of Guardiola and Villanova.

The 51 year old Martino was drafted in to take over from the terminally ill Tito Villanova, who later died of throat cancer, but was never able to keep the Barcelona bandwagon rolling and Saturday’s home draw with Atletico, meant a passing on of the league title to their opponents.

The club’s website states that: “The FC Barcelona Board of Directors have this evening confirmed Luis Enrique Martíneza the new first team coach, following a proposal from Sporting Director Andoni Zubizarreta. Luis Enrique, 44, will sign a two year deal.” Zubizarreta had been a strong advocate for the return of Enrique, and reports have been linking the club’s sporting director as courting the former midfielder for a few weeks.

Now 44, Enrique will be joining the club for the third time in his career. He initially joined after leaving Real Madrid on a free transfer in 1996 and made over 300 appearances in his eight-year stint at the club, two of which saw him as captain. Whilst at the club, he won two La Liga titles, enjoyed a couple of Copa del Rey triumphs and secured the UEFA Cup.

His second coming was as manager of the club’s B team, succeeding Pep Guardiola, when the now Bayern Munich manager was elevated to the position of first team coach. He enjoyed great success, and under his charge, the team was promoted to the second tier of Spanish football for the first time in eleven years, the highest they could aspire to within the league rules. He then left to move to Italy and take charge of Roma. Although certainly not experiencing a disastrous time, he left the eternal city after a single season to return to his native Spain and take over at Celta Vigo.  Many thought however that he was always the ‘man in waiting’ who was fated to take control at the Camp Nou; with this announcement, that fate has now come to pass.

In what is bound to be a popular appointment, Enrique will be tasked with revitalising the club that still seems to be suffering from the loss of Villanova. It was a malady that Martino was unable to cure. The Cules will be hoping that a man who so epitomised the spirit of the club during his playing days can work the oracle.

With Messi already secured on a new contract, there may well be some movement to realign the squad before next season as Enrique faces up to the challenge of returning the Blaugrana to their self-appointed place at the head of La Liga. With two Madrid clubs fighting out the Champions League Final however the task will not be an easy one.