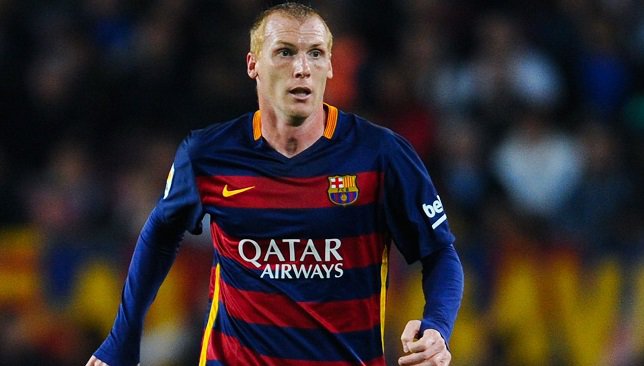 Arsenal have made an enquiry over the availability of Barcelona’s French defender Jeremy Mathieu after failing to reach an agreement with Valencia for Shkodran Mustafi.

Several sources claimed earlier this week that the Gunners have a verbal agreement with Mustafi over his proposed move to the Emirates this summer but reports now suggest that the German International’s father has revealed that there is no deal in place between Arsenal and his son.

Mustafi remains a prime target for Arsenal this summer but the Premier League giants remain reluctant to meet Valencia’s £30 million asking price for the 24-year-old and are now considering to make an offer for Barcelona’s versatile defender Jeremy Mathieu.

The Frenchman, who can operate as a centre back or as a full back, joined Barcelona in 2014 and has since made 75 appearances in all competitions for the Spanish champions.

Barcelona are reportedly willing to offload the 32-year-old this summer, having already bolstered their defense with the arrivals of defensive French duo Samuel Umtiti and Lucas Digne.

Arsenal are thought to be confident of persuading Mathieu to move to the North London by offering him guaranteed regular football, which he is unlikely to obtain at the Camp Nou this season.

Arsene Wenger is poised to sign a central defender before the transfer window shuts down on August 31 after watching his backline being depleted with major injury setbacks. Gunners’ skipper Per Mertesacker will be ‘out for months’ after sustaining a long-term knee injury, while Gabriel has also been ruled out for up to eight weeks.