Both players have been sensational for the Gunners ever since they joined from Real Madrid and Barcelona, respectively. However, reaching an agreement has not been too easy for the Premier League giants.

According to recent reports, both players are holding out for a bumper pay rise, and, although, Arsenal are willing to offer them a significant raise, the club’s offer is still some way off the players’ demands. London Evening Standard are reporting that Sanchez and Ozil want parity with the league’s other top earners if they are to sign a new deal.

Arsenal are thought to be willing to offer around £200,000-a-week, but that is nowhere near the wages of England’s top earners. Paul Pogba earns around £290,000-a-week, and the two Arsenal stars are looking to bag a contract similar to that. Arsène Wenger has previously stated that no player at the club should earn more than the manager, and, therefore, Arsenal are unlikely to accept the pair’s demands.

Sanchez and Ozil are both some of the best players in Europe right now and should be paid accordingly. There is no doubt that both players have done better than the likes of Rooney and Ibrahimović in recent past, but the Manchester United duo are considerably better paid.

Wenger has done well to change his philosophy in terms of transfer spending. The French manager was reluctant to spend big on players in the past, but that has changed in recent years. It seems that he might have to change his principles about player wages if Arsenal want to hold on to two of their best players. 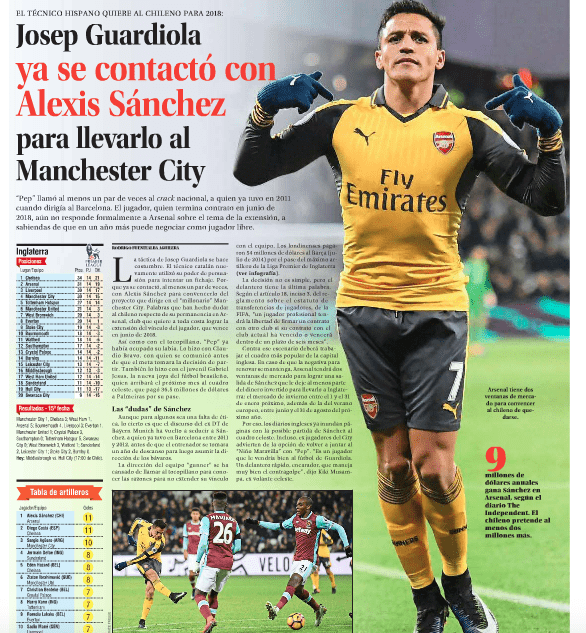 In other news, Chilean newspaper El Mercurio are reporting that Pep Guardiola is monitoring Alexis Sánchez’s situation at Arsenal, and has already contacted him about a move to Manchester City.

Apparently, the former Barcelona manager wants to sign Sánchez when the Chilean’s contract expires in 2018. However, if the player fails to reach an agreement with the Gunners regarding a new deal, he could be sold sooner. Arsenal paid £35 million for him a few years ago, and will look to recoup some of that if they feel Sánchez is not willing to reduce his demands.

Guardiola has denied the rumour recently, but there is no doubt that Sánchez will be a man in demand if Arsenal fail to agree on a new deal with him before the end of this season. Sánchez is a massive fan favourite at Emirates, and if he ends up at Manchester City because the club is unwilling to pay a few million more, Arsenal fans won’t be too happy about that.