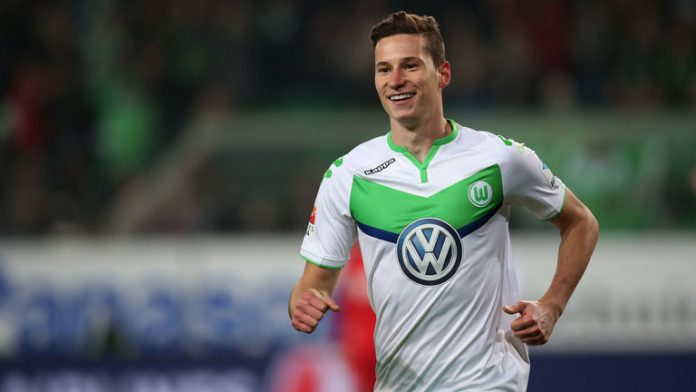 Premier League giants Arsenal have received massive boost in their bid to sign German International Julian Draxler after the player confirmed his desire to leave Wolfsburg.

The former Schalke 04 attacker, who joined Wolfsburg only last summer in a club record deal of €35 million, has been heavily linked with Arsenal but a host of other European clubs are also thought to be interested to sign the young attacker.

Wolfsburg’s sporting director Klaus Allofs claimed last week that Draxler is ‘100 per cent’ staying at the Bundesliga outfit but the 22-year-old has hit back at those suggestions by revealing the club have known about his desire to leave for the past three weeks.

In an interview with the German newspaper Bild, Draxler said:  “Before you go public like that, you really should speak with me first.”

“The situation with me is that I made it clear to (head coach) Dieter Hecking after we were knocked out of Euro 2016 in the semi-final that I would like to leave Wolfsburg.

“The coach has known about this for three weeks. It’s very surprising that they have been talking about me to the media for weeks.

“When I joined, I was assured – verbally – that I could leave the club whenever the opportunity arose,” Draxler added.

“Both Hecking and (sporting director) Klaus Allofs said this.  It was always clear to everybody that I would like to join a top club in Europe, if I were to get the chance.”

Draxler, who was part of the Germany’s squad for the Euro 16 in France, netted five goals and provided another five assists in 19 Bundesliga starts last season.

Meanwhile, Arsenal remain interested to sign Lyon’s star striker Alexandre Lacazette to bolster Arsene Wenger’s attacking options for the upcoming campaign. But should a deal fail to materialize for the French forward, the Gunners appear poised to offer Draxler an escape route to leave Wolfsburg this summer.