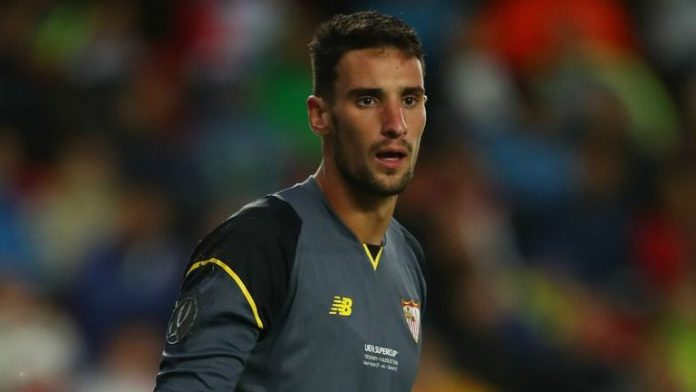 Arsenal have been linked with a move Sevilla goalkeeper Sergio Rico.

Spanish media outlet Estadio Deportivo has claimed Gunners’ new boss Unai Emery wants to reunite with Rico after being impressed with the 24-year-old during his time in Spain.

Rico, who has one cap for Spain, was already expected to exit his home country this summer and Arsenal are in pole position to secure his services.

Arsene Wenger was thought to be considering recruiting an eventual successor to Petr Cech in the next transfer window and Emery appears set to follow that plan.

He made his first team debut for Sevilla in a 2–0 home win against Getafe in 2014.

Rico finished the season with 37 appearances in all competitions, including 11 in the Europa League.

He was in goal as Sevilla beat FK Dnipro Dnipropetrovsk 3-2 in the final of Europe’s secondary competition.

Rico made his senior international debut for Spain in 2016 and was part of their squad at that year’s European Championships.

However, he has missed out on selection for this summer’s World Cup, with David de Gea (Manchester United), Pepe Reina (Napoli) and Kepa Arrizabalaga (Athletic Bilbao) being chosen ahead of him.