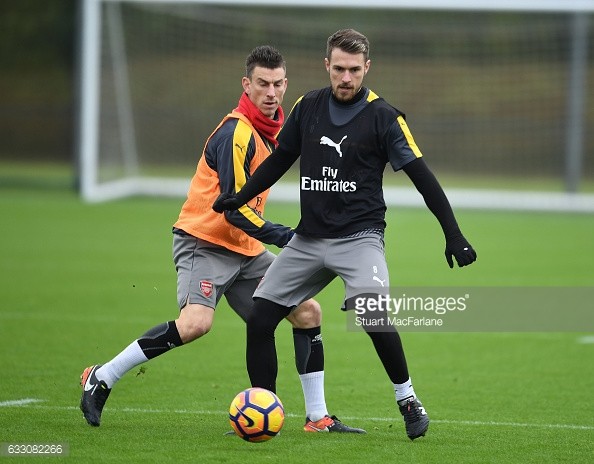 Arsenal duo Laurent Koscielny and Aaron Ramsey have returned to first-team training. They are both in line for returns against Liverpool this Sunday at Anfield, the Telegraph reports. With two defeats in their last three Premier League games, the Gunners will drop out of the top 4 if they get beaten by the Reds. Jurgen Klopp’s men are currently a point behind, albeit having played a game more.

Koscielny limped out of Arsenal’s game against Bayern Munich with a back injury a couple of weeks ago. At the time, the Chapions League last 16 tie stood at 1-1 at the Allianz Arena, with the English side having genuine hope after securing an away goal. The star defender’s exit though, was followed by an incredible collapse. The night ended with a 5-1 Bayern win, and all the goals were a comedy of errors in one way or the other from the Arsenal backline.

Koscielny’s importance to the Gunners is immense. The Frenchman has consistently been his side’s standout defender in the last few years, and also one of the best centre-backs in the Premier League overall. His presence is monumental to Arsenal’s confidence as a unit, and it will be a massive boost to have him back for a game as big as Liverpool.

Ramsey, on the other hand, has been out since January with a calf injury. The Gunners have looked threadbare in the centre of the park, with Santi Cazorla also out injured and Francis Coquelin‘s form dropping like a stone. It might be worthwhile trying Ramsey in the double-pivot in the 4-2-3-1 system along with Alex Oxlade-Chamberlain.