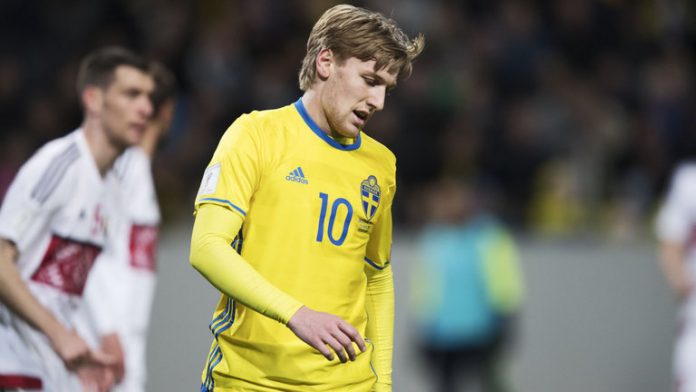 Arsenal have been linked with a move for RB Leipzig winger Emil Forsberg.

Calciomercato says the Gunners have added the Swedish international to their list of targets to replace Sanchez.

Forsberg has previously been linked with Liverpool and Manchester United, but Sanchez’s arrival at Old Trafford is likely to end suggestions that he could move there.

Theo Walcott’s move to Everton has increased Arsenal’s need for reinforcements, although Leipzig are reluctant to sell the 26-year-old.

Forsberg started his career with GIF Sundsvall before moving on to Malmo in 2013.

He joined Leipzig in January 2015 and has gone on to score 20 goals in 97 appearances for the club.

Arsenal remain in the frame to sign Bordeaux’s Malcom, although Liverpool are also believed to be interested in the Brazilian.

With Walcott sold and Sanchez soon to follow, Gunners’ boss Arsene Wenger is likely to come under increasing pressure if he doesn’t strengthen his squad soon.

Playmaker Mesut Ozil is yet to sign a new contract and has been linked with Juventus, further highlighting Arsenal’s need for new signings.