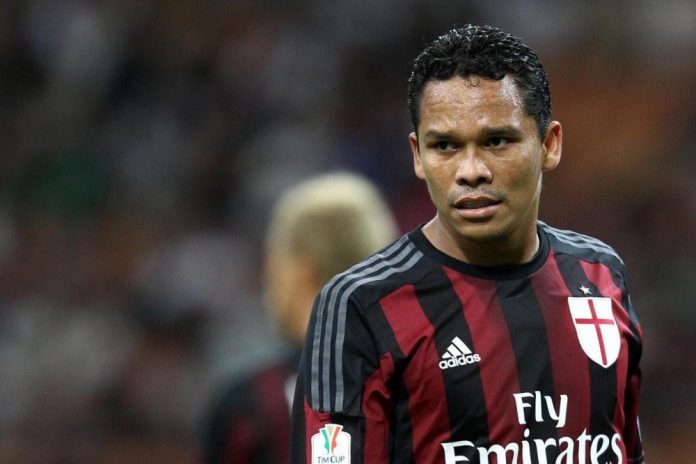 Arsenal are the latest club to be linked with a move for AC Milan striker Carlos Bacca.

Over the past couple of the weeks, the Colombian striker has been touted to live the San Siro this summer after the club’s failure to qualify for the UEFA Champions League.

Bacca scored 18 goals in his 38 Serie A appearances for the Rossoneri in his first season in Italy following his €30 million switch from Sevilla 12 months ago.

Now the Colombian wants to leave.  Carlos Bacca is quoted by Spanish newspaper AS as saying:

“It’s my dream to play in Champions League and work toward winning it.

“Unfortunately, the failure for Milan to reach the tournament is one of the themes of our discussions with the club.”

It has been reported already this summer that West Ham United are keen to make a move for the 29-year-old, thought he is believed to be keen to play in the Champions League this season.

Arsène Wenger is also keen to land a new striker before the start of the season to add competition to Olivier Giroud and Danny Welbeck, and turn the club back into a serious Premier League title contender.  They are able to offer the Colombian Champions League football this season.

The Gunners have been strongly linked with a move for Napoli’s Gonzalo Higuaín though recent reports have the Argentine international valued as high as £80 million.  Now Italian outlet La Gazzetta dello Sport (via Gazzetta World) are reporting that Arsenal are also in the hunt for Bacca too.

It sounds like a real possibility that Carlos Bacca could sign for Arsenal should Milan allow him to leave for the same price they signed him for, and the price West Ham are reportedly offering – €30 million (£25m).

He has been a regular goalscorer in his four full seasons in Europe – scoring 25 goals in 35 league games for Club Brugge in 2012-13, 34 goals in his 72 La Liga appearances for Sevilla over two seasons and then last season in Serie A where he averaged nearly a goal every other game.

The striker is excellent running off the shoulder of the last defender to get himself into one-on-one situations and is an excellent finisher.  Both of these qualities would be an asset to Arsenal in comparison to Giroud.  With the likes of Mesut Özil, Alexis Sánchez, Santi Cazorla and Aaron Ramsey creating chances for Bacca, Arsenal would be sure to hit the back of the net frequently.

Whether it’s Carlos Bacca or Gonzalo Higuaín, Arsenal are being linked to two top strikers this month – signing either would be a massive boost to their title credentials.