Throughout the 2006/2007 season we kept talking about poor refereeing decisions and how they were costing teams valuable points.

And from the whining / ranting of the managers, you’d have thought that refs were killing people, not just being crap.

Some bright folks launched a website called ‘The Right Result in August 2006 – and I’ll let them tell you the next part of the story:

The Right Result website was launched in August 2006 with a view to creating an alternative Premier League table based upon how things would look if the referees got all the key decisions correct.

These decisions relate to penalties that aren’t given when they should be, and those that are awarded dubiously, whether a ball did or didn’t cross the line, goals disallowed for questionable offside and so on. Decisions are made virtually every week that not only can affect the scoreline of a game, but actually alter the outcome.

Each week the Right Result panel selects the key controversies that have happened during the course of the week’s matches, applies the strict rules of the game to them and passes judgement on whether or not those decisions should stand. If not then the match results are adjusted accordingly (rules governing decisions).

The panel is a neutral and independent body comprised of members from the Association of Football Statisticians.

I’ve personally been following RR throughout the season, and despite a few reservations, I quite like the format. I think it’s important to globalise this but in the right way – to create pressure on the FA to help referees but not to harass or criticise referees themselves.

Refs have a torrid time anyway, they are under pressure at all times and it is a big ask to get every decision right. And they’re not helped with aggressive players and lack of technical support (I fully believe in bringing in video technology and even more officials to help referee games).

Anyway, here’s the ‘right result’ – what the Premiership would have looked like this season if the refs had gotten every decision right (according to the folks at 11v11, that is): 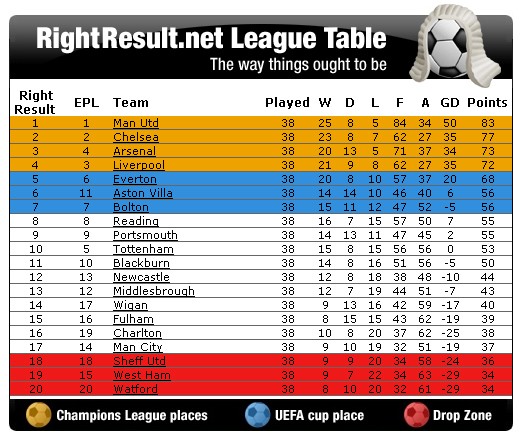 For the full press release from RightResult.net, download and read this PDF.

And make sure you join us and RightResult from August 2007 as we kick off the next season with a closer-than-ever look at how the FA and the Premier League is shortchanging fans by refusing to help the referees.