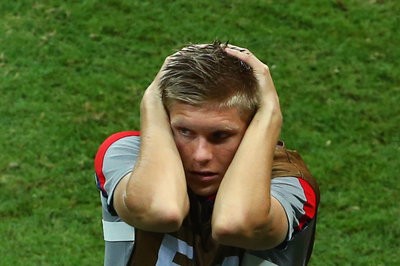 The 23-year-old U.S. World Cup veteran will not be in action for club and country for at least six more weeks.

Aron Jóhannsson will be out of action till possibly October, however, it is because of a groin injury and not his original ankle injury he suffered before the World Cup.

The 23-year-old American striker club, AZ Alkmaar announced today that he will be missing at least up to six more weeks due to his recent groin surgery, and it was his second surgery within a month.

Which means he will miss the Sept. 3 road friendly for the Yanks at the Czech Republic, and most likely he will miss the Oct. 10 home match for the Stars and Stripes against Ecuador. Since, the former Icelandic youth international should be making his return to AZ from his injury in Oct.

AZ Press Officer Daan Schippers also stated, that the current groin injury is similar to the previous groin injury Jóhannsson suffered back in 2012 when he was playing for Danish side, AGF Aarhus; he was required to get a surgery then as well. However, his current groin injury has been affecting him since the U.S. began to prepare for the World Cup. Though the injury became more aggravated as he was rehabbing from his recent ankle surgery.

“It was not found that he needed surgery until he was in rehab for his ankle,” AZ press officer told MLSsoccer.com, about the U.S. international forward current condition.

With the Alabama native bound to miss the next month friendly for the USMNT that will take place in Central Europe, this will require U.S. Coach Jürgen Klinsmann to dig deeper in his hat to replace the two injured European based strikers Terrence Boyd and now Jóhannsson. The two would have been considered favorites to get called for the game against the Czech Republic in Sept. before suffering their injuries. Since, Klinsmann stated after the World Cup that he wanted to give the young players more playing time for the national team before the 2015 CONCACAF Gold Cup begins next summer.