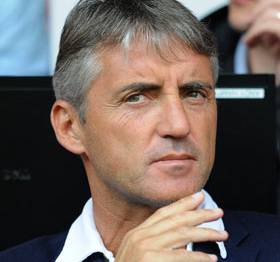 With Manchester City currently ‘wallowing’ down in fourth place after only 13 Premier League games, the fact that manager Roberto Mancini has been having to justify his position for the past weeks is fairly ludicrous – yet equally indicative of the anabolic swell that the club’s pretensions have undergone during the past couple of years.

City travel to Craven Cottage tomorrow in the hope of raiding three vital points from a Fulham side currently headed up by Mancini’s predecessor Mark Hughes, who was freed from his duties at Eastlands in barbaric fashion after failing to meet his oligarchical superiors’ similarly protracted targets.

In an attempt to vindicate the club’s decision to sack Hughes, chief executive Garry Cook did so citing ‘the trajectory of recent results’, describing how the Welshman had fallen behind necessary pace required to meet City’s target of a 70-point total for the season – though a resolute subservience toward his supposed new ‘rivals’ Manchester United and Chelsea hardly helped Hughes cause either.

Skip forward 11 months and (to date) the pricey side being piloted by Mancini, the incrementally ‘bigger name’ bought in to replace Hughes at City, have ironically accrued the exact same number of points (22) and, here’s the twist, a two-goal deficiency in the +/- column.

For the record, Hughes’ side lay in sixth but, arguably, within a more competitive field and were displaying some much more expansive football into the bargain.

In short, should Mancini fail to win on Sunday, he will have a worse record than Hughes did at the corresponding stage last season – a record which, incidentally, left Hughes within a fortnight of receiving his marching orders.

Hughes himself has topped-up the acrimony between the two camps by insisting that City’s £multi-million folly will continue to stall if they insist on ‘accelerating the process of gaining success’ without attempting to build on any kind of stable foundations – insisting that his former employers have made no tangible progress with Mancini at the helm:

“They [sacked me] with the view that they wanted to accelerate the process of getting success. That doesn’t seem to have happened. I know what I left behind, that the club and the group of players I had there was good enough to hit the targets I was given.

I knew they had to spend significantly more money last summer – that opportunity was going to be given to myself. It wasn’t. If I had still been there I would have been there two and a half years so that I think would have helped.”

Mancini was quick to retort:

“We have improved a lot, we have won a lot of away games. We are in fourth position, two points behind Manchester United. We must check again at the end of the season but I think we will get into the Champions League and probably win something.”

The current City incumbent also jibed Hughes with the admission that he had been coveting the Welshman’s job, and had spoken with the club before he was sacked on December 19th.

However, Mancini denied that he should be remorseful over that manner in which Hughes was dispatched, insisting that such methods are merely a part of the cut-throat world of high-enterprise football management:

“No. This is life. This is the manager’s life. Today you can stay here, tomorrow you can be at another club. When one manager doesn’t work there is another manager.

The world is full of football managers. It’s not my problem. If the manager doesn’t accept this, he doesn’t do this job.”

“It is not something that sits comfortably with me or something I’ve ever done. I have respect for people’s position. If clubs come to you and ask ‘are you interested?’ I would say I wasn’t aware there was a vacancy.

But, when the wheels are set in motion, these things happen. I’m not naive enough to think it doesn’t happen. I’m big enough to understand.

It was disrespectful towards me, the way I was treated in the end. In fairness I had all the support on occasions when I needed it.

There were occasions when there was not a lot of support. Towards the end, when I needed support, it was absent. So read into that what you want.”

Good grief. With all this senior management-level sniping, you’d be forgiven for thinking that you were listening in on the arse-end of an episode of the Apprentice rather than the preamble of what should, by rights, be a fairly inconsequential football match.

That said, a surprise defeat for City on Sunday and who knows what lengths chief exec. Cook and his erstwhile crony Brian Marwood will go to in seeking to justify their stupefying salaries at Eastlands.

You can be as sure as sh*t that they’d advocate the sacking of another manager before they admitted to their own short-comings – but, hey, that’s just business.