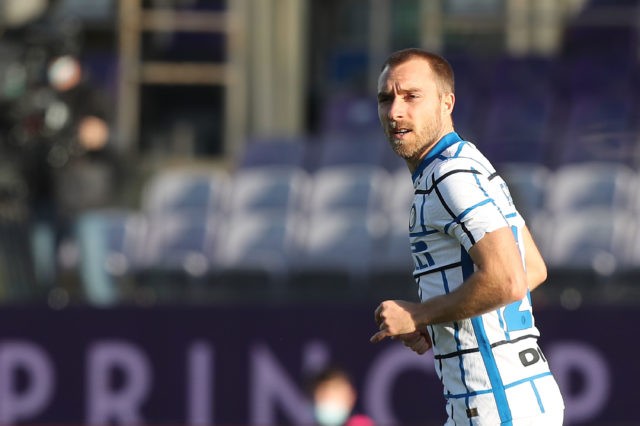 Inter Milan manager Antonio Conte was delighted with the performance of Christian Eriksen following the club’s 3-0 derby win over AC Milan on Sunday.

The Denmark international has endured a tough time since his arrival from Tottenham Hotspur in January 2020 but he has recently been a regular pick under Conte.

Earlier this term, he was a regular on the bench and CEO Giuseppe Marotta confirmed that Eriksen could leave the club during the January transfer window.

Everton, Leicester City and Spurs were all credited with an interest but ultimately he stayed put at San Siro and he appears to have redeemed himself.

The Dane has started three of the previous four Serie A games for Inter in a central midfield role and Conte described his derby display as ‘his best performance’ for the club.

“I told Christian that this was his best performance for the Nerazzurri so far,” Conte said in an interview with InterTV, as quoted by SempreInter.

“He did everything I asked of him, playing in a double pivot, going forward when necessary contributing decisively both in possession and without the ball.

“He can improve further, but the fact that he is stepping up is a positive for us.”

The Nerazzurri went into the derby with a slender one-point lead over AC Milan and they were able to extend the advantage with a stellar 3-0 win.

Lautaro Martinez opened the scoring after just five minutes following a cross from Romelu Lukaku and they managed to hold onto the lead at the interval.

The Rossoneri started the second half in a quick fashion and Samir Handanovic produced three excellent saves to deny Zlatan Ibrahimovic (twice) and Sandro Tonali.

Prior to the hour mark, Martinez tapped home the club’s second and Lukaku made it three-nil on the break with a curled shot to beat Gianluigi Donnarumma at the near post.

Conte’s side are now four points clear of their fierce rivals at the top of the Serie A and are also nine ahead of AS Roma after their frustrating draw against 10-man Benevento.

At the moment, the Nerazzurri seem to hold a distinct advantage over their title challengers with no European football to concern them for the rest of the season.