According to reports in Italian website TMW, Cameroon striker Samuel Eto’o who has already been released by Chelsea might join Turkish side Galtasaray in the summer. The 33 year old had a shocking World Cup failing to win even one game, earlier had taken to Instagram to bid an emotional goodbye to Chelsea fans. 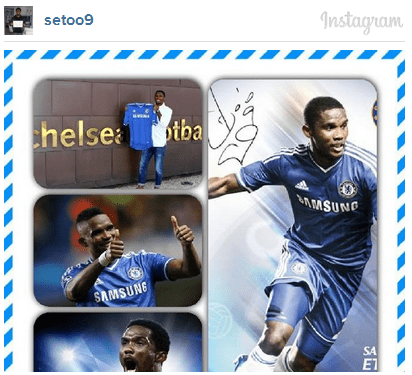 The former Inter and Barcelona striker has been with loggerheads with Jose Mourinho, the Portuguese manager who had hit out to the striker’s performance at Stamford Bridge questioning his age. Eto’o however responded to the verbal jibes claiming that Mourinho is ‘only a puppet’ and is a big fool.

The two time Champions League winner believes that he can still play in the biggest of stages despite his age. “Contrary to what a puppet says about my age, I am still physically fit. At 33, I feel real good. I have proven that I could do better than youths.”

Eto’o would be willing for a new experience and it is believed that his representatives has already initiated talks with Galatasaray and it remains likely that the Istanbul club could be his most likely destination. Italian side Roma have also been interested in the Cameroonian but transfer talks regarding a move to the Giallorossi have died down over the past few days.